Against the odds in Iran

It’s the end of March in southeast Iran, and I am setting up camp where the shifting sands of the Lut Desert, or Dasht-e Lut, forge a living work of art. Over sunset, my eyes get wider. Like in nowhere else, I’m entranced, the golden light unfolding the magnetism of a mystic wilderness. Max, my husband, and I assemble the tends under a gentle desert breeze. I look around and see nothing but infinity and silence in giant dunes framed by alien rock formations. “Lut is my favorite place in the world,” says Hooman, our Iranian fixer in the desert. “It’s the only place where I can have a glimpse of what freedom feels like.”

The Dasht-e Lut is a vast salt desert in the provinces of Kerman, Sistan, and Baluchestan. It’s one of the hottest places on Earth, beating El Azizia, in Libya, and is Iran’s only natural Unesco World Heritage site. We are camping among Lut’s exotic Kaluts and salt plains, a remote, pristine landscape that, for many years, scientists thought was too hostile to sustain life. “It turns out we do find animal life here,” explains Hooman. “Who knows?” he goes on, “Maybe we are lucky enough to spot a desert fox over dinner tonight.” 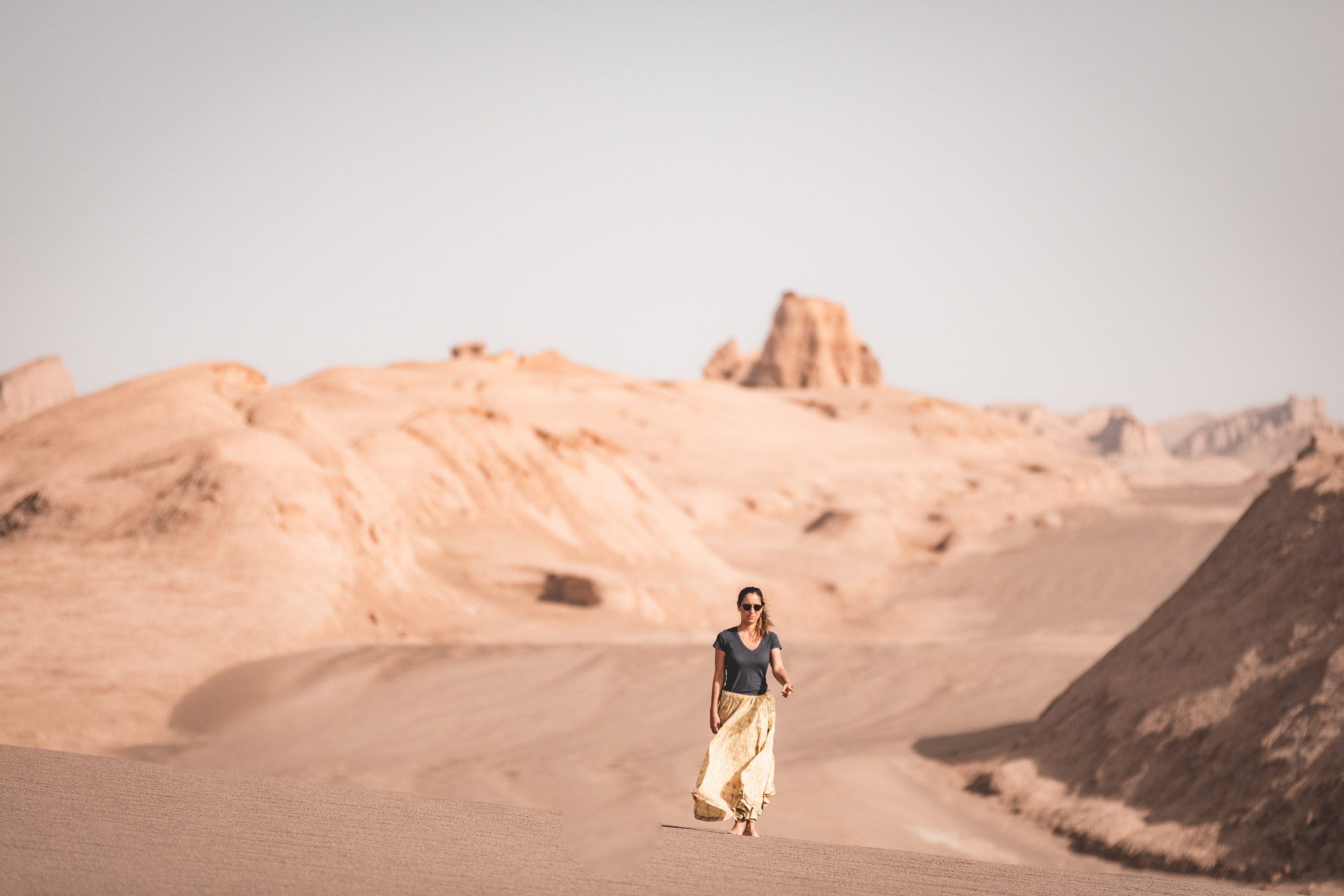 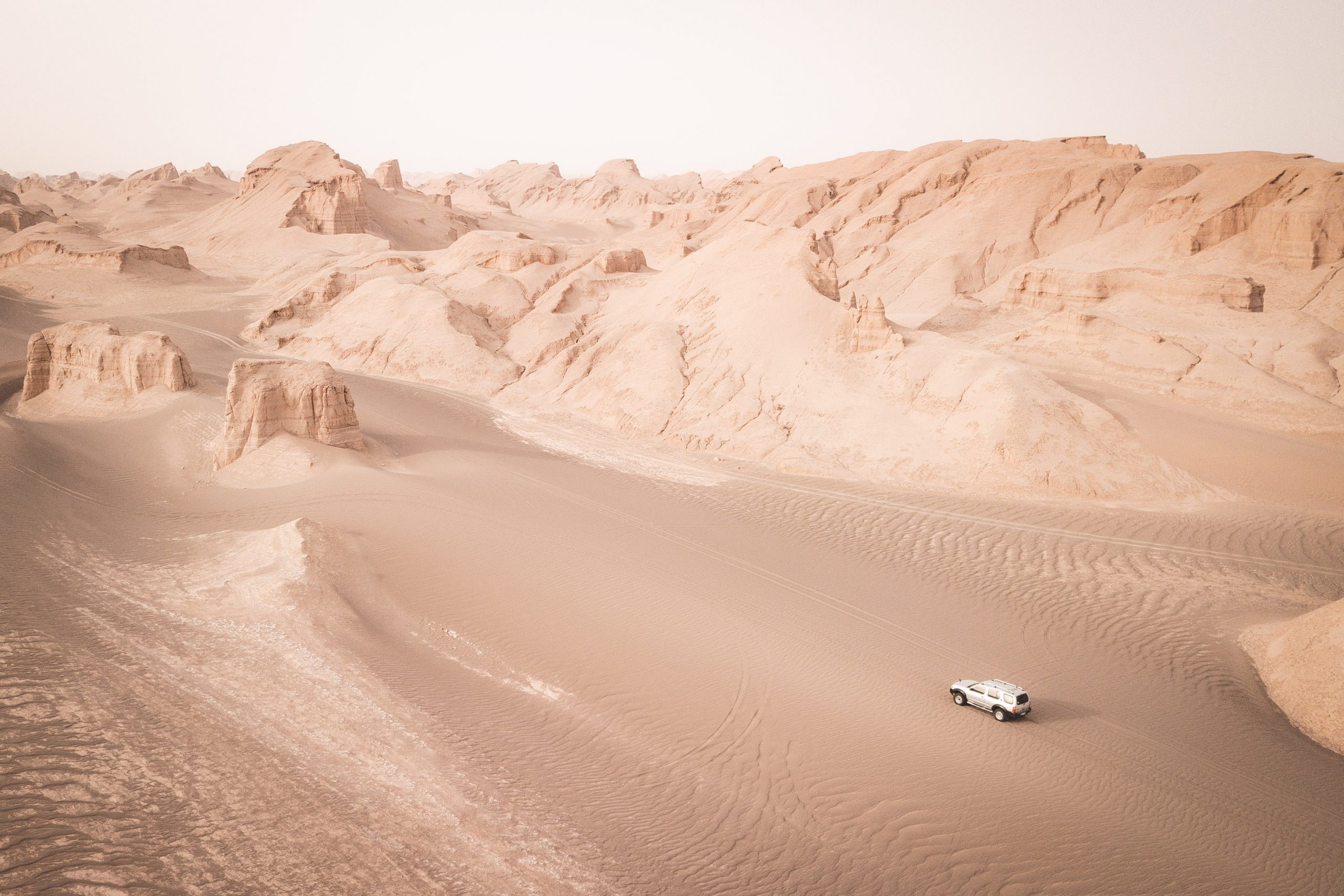 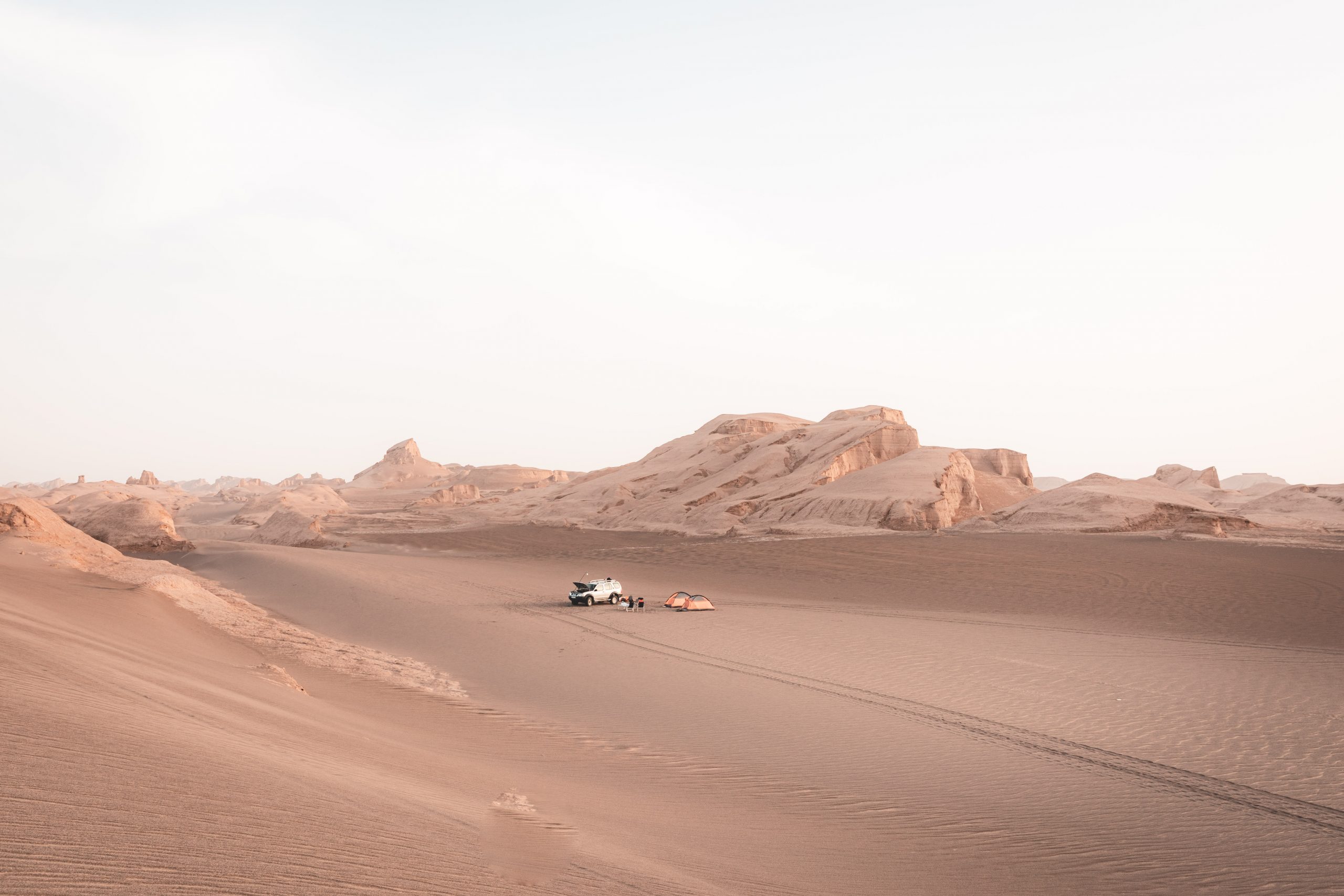 Setting up camp in southeast Iran

I had arrived in Iran three days earlier, though, with my flight landing in the heartland of the Persian culture, Shiraz, the city of poets and beautiful gardens. It was a sunshiny early morning, and I went straight to the Nasir ol Molk mosque, or Pink Mosque, where stained-glass windows cast colorful patterns on the Persian-carpeted floors. The sun had just come out, and I was alone, with no other tourists, in one of the most stunning mosques in the world. As time passed by, children played on the patchwork of prayer carpets next to their mothers, whose facial expressions revealed the intensity of their devotion. 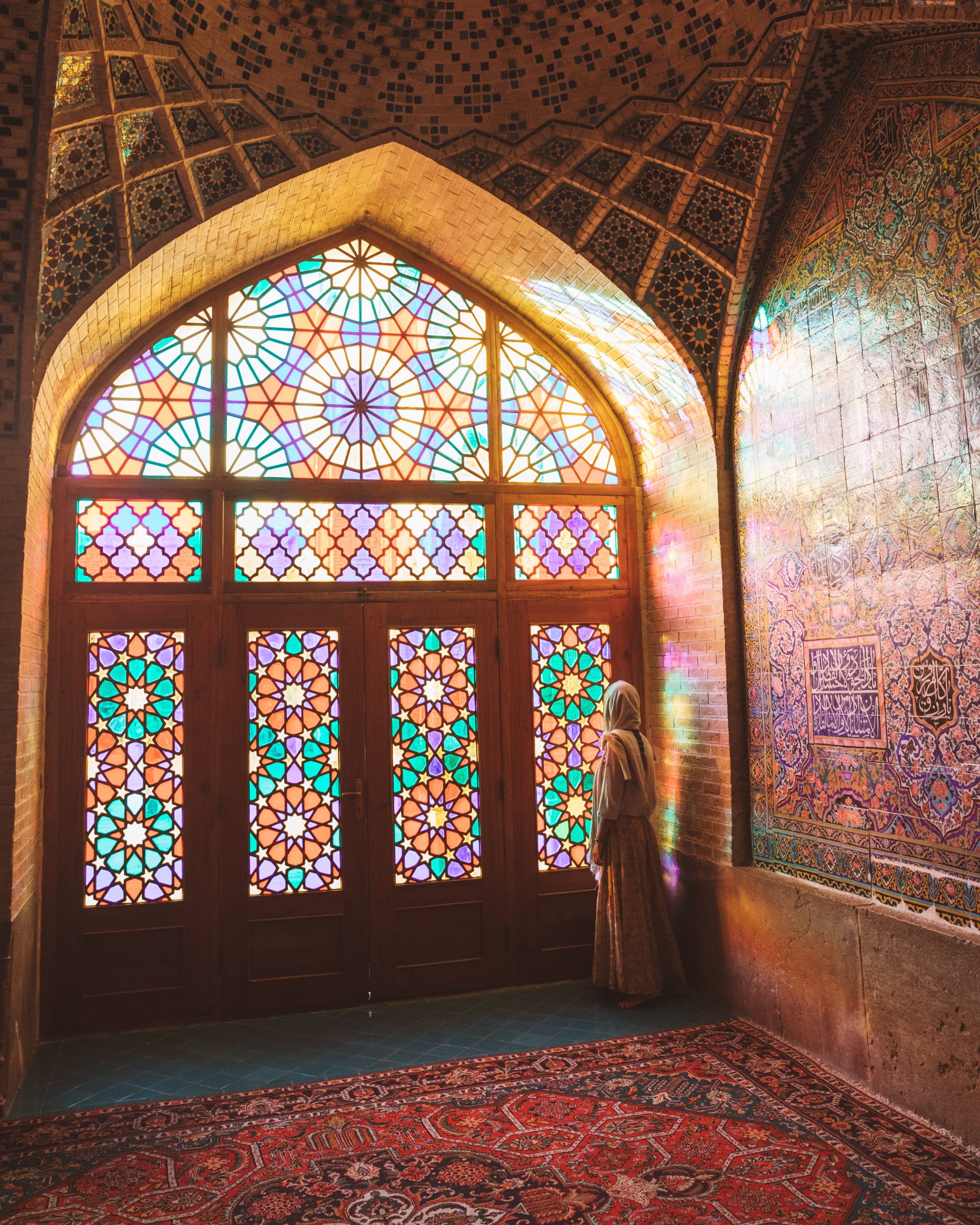 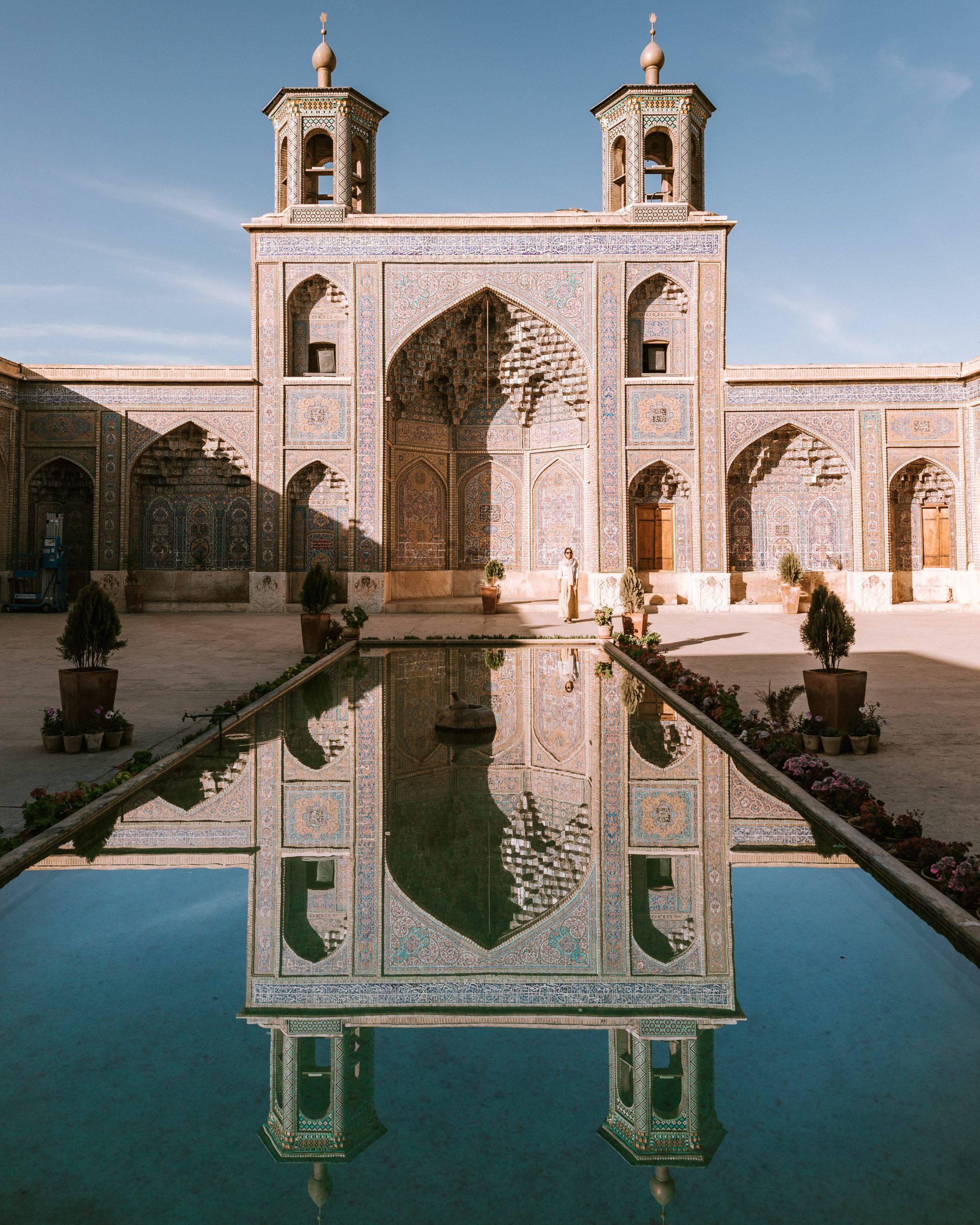 The day continued, and I went on to visit the spectacular Ali Ibn Hamza Shrine, made entirely of a mosaic of mirrors and glass. I had never been anywhere so bizarre; a compelling reminder that Shiraz once was one of the most meaningful destinations for the medieval Islamic culture. It’s hard to describe how surreal is the Shrine for its exterior architecture and interior intricate prism mirror decorations. But above all, it is a place with such a lively vibe, where I could genuinely take in that powerful energy that comes with faith. 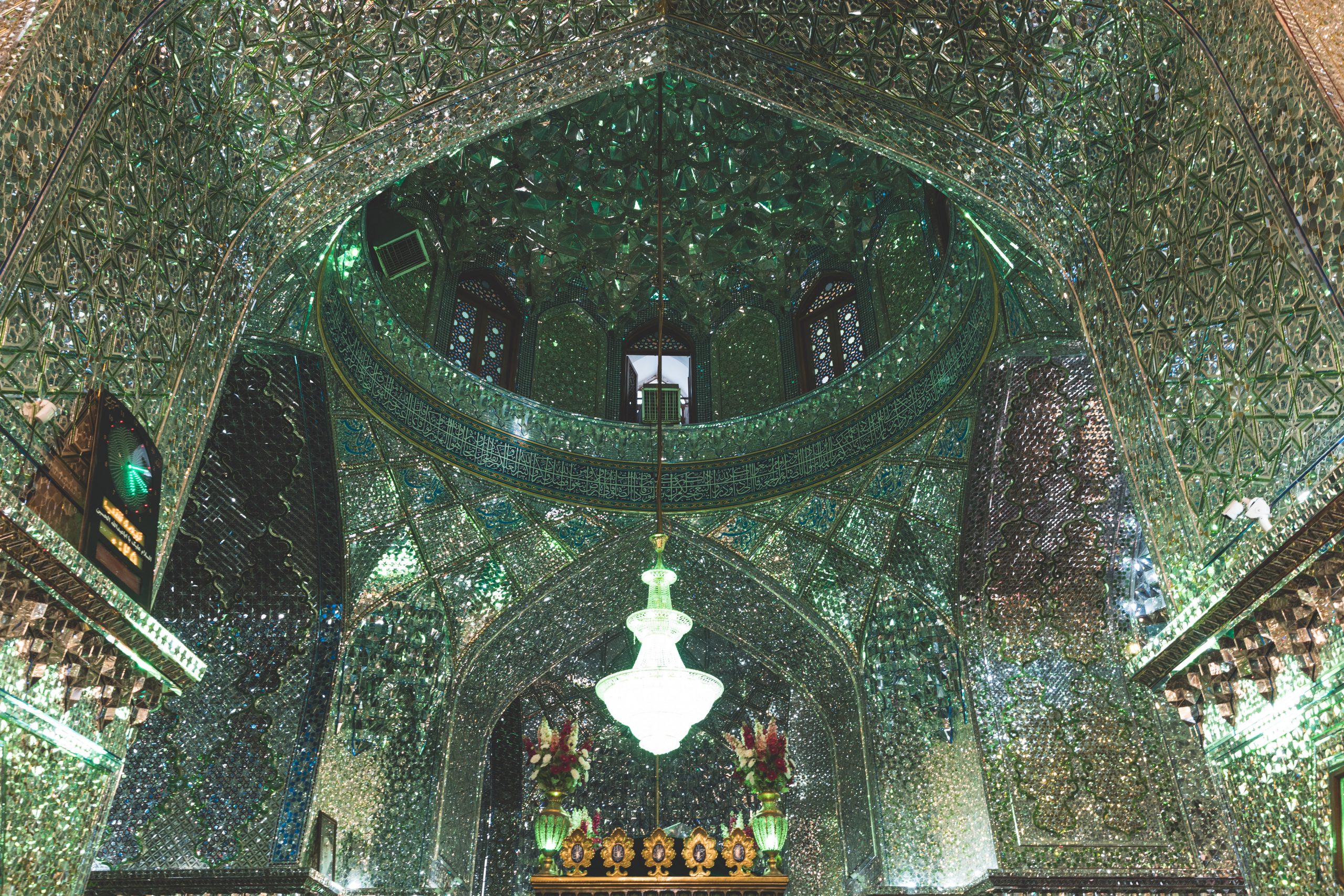 The next day, just an hour’s drive north-east of Shiraz, I joined a trip to the ruined city of Persepolis, which dates from 515 BC. I wanted to visit this site for its remarkable significance for Persian culture – it’s the capital of the former Achaemenid Empire – and also one of the world’s finest examples of ancient architecture. Persepolis was declared a World Heritage site in 1979 and became quite popular among visitors in Iran (well, popular for Iran). But then, it turns out, what did perplex me the most was the site I came across 5 km northwest of the ruined town. Lost in a world of its own, in Naqsh-e Rustam, I found myself among colossal tombs of Persian kings dating back to the first millennium BC. This fascinating experience transported me to an unthinkable world of empires, power, and religion.

As I crisscrossed the country, traveling from one place to another, I often felt safe. But there were also the moments when I had to board on domestic flights, the first one being to Kerman – from where I headed to Lut desert. Every time I flew between local airports, I noticed the outdated aircraft – a consequence of the harsh sanctions imposed on Iran. For decades, news coverage of the country has been overwhelmingly negative, led by topics such as the Islamic Revolution in 1979, the crackdown on protests in 2009, and the permanent fear of nuclear weapons. After the 2015 nuclear agreement between Iran and six world powers, most sanctions were lifted, and the reconnection to the western world was on the horizon. But the optimism didn’t last long. In the last years, things have taken a turn as the Trump administration withdrew from the nuclear deal and began restoring strict sanctions on Iran, heightening tensions between the countries. The number of visitors to Iran has sharply dropped ever since. And now COVID-19. 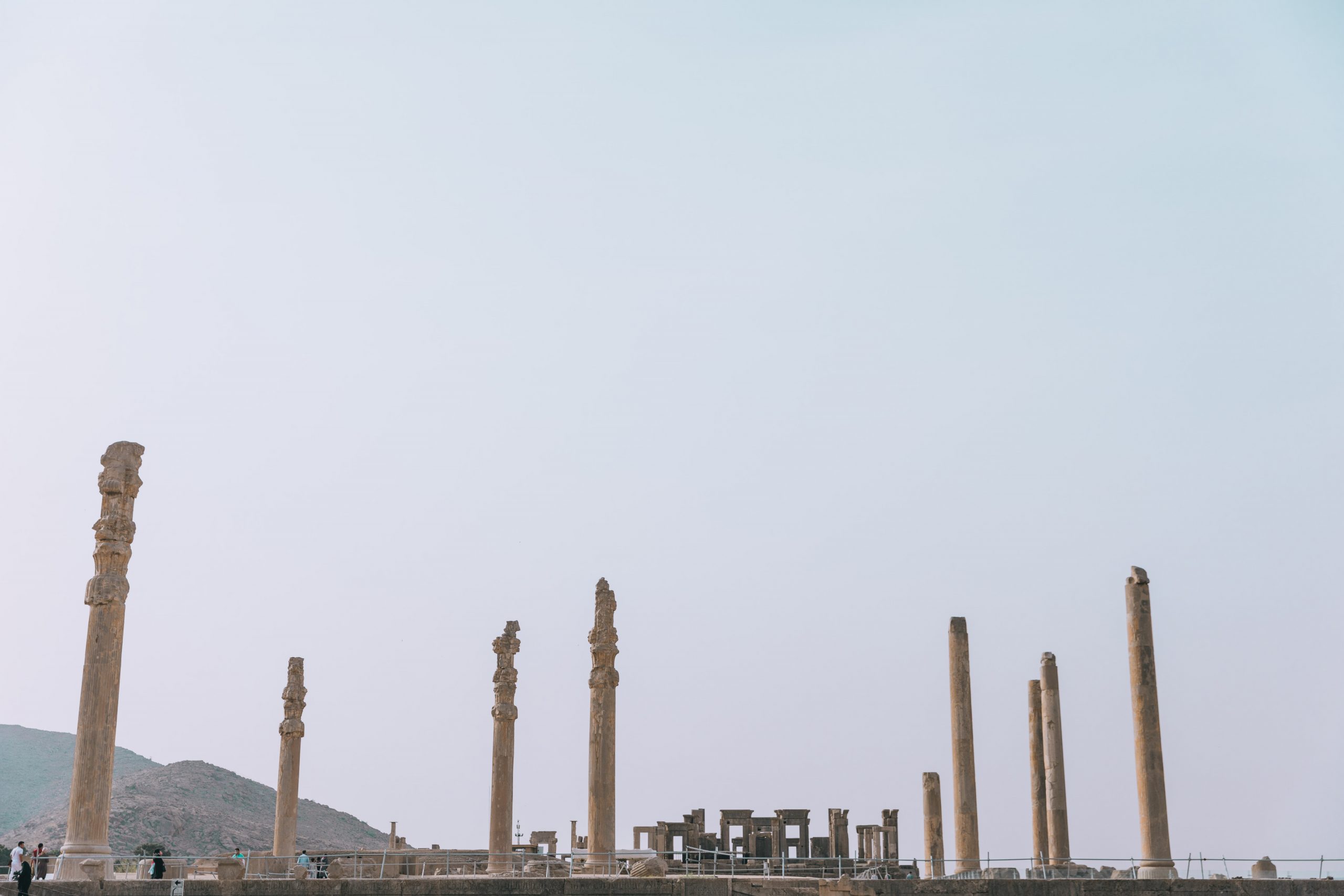 The ruined city of Persepolis, dating from 515 BC 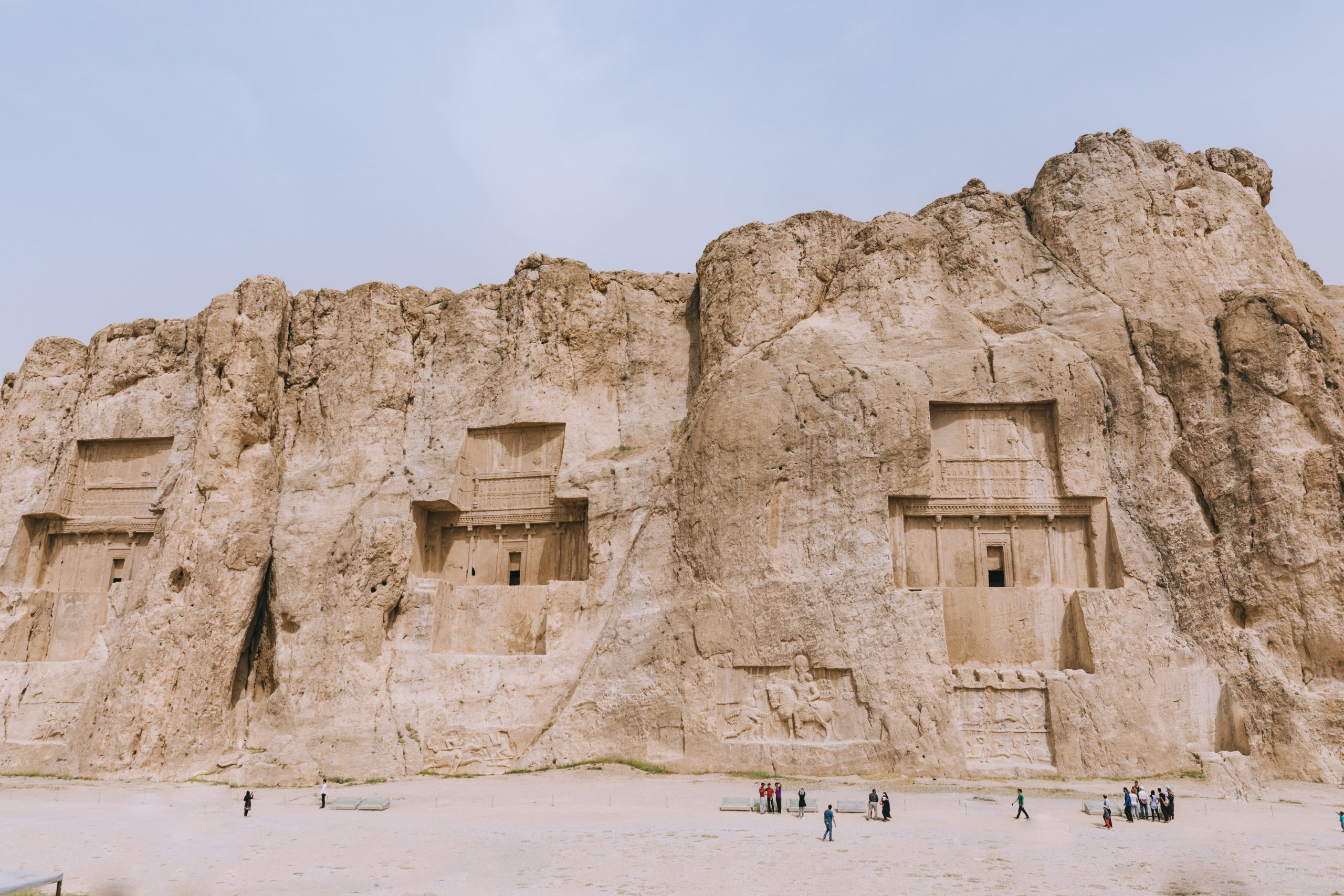 Naqsh-e Rustam, the colossal tombs of Persian kings dating back to the first millennium BC

Despite the complicated politics, I traveled independently in Iran, relying on the advice and generosity of ordinary locals that I got to know via a Facebook group. Unlike any other travel destination, social media, it turns out, proved to be the best source of information for a trip here. It was through the “See you in Iran” group that I found local guides, got hotel rooms, and even flight tickets booked in. There were barely any tips on the traditional channels. Iran is, in every sense, an odd travel destination that does require a bit of determination to be figured out, which is, in a way, also the appeal of coming here.

And the effort surely pays off. Iran is a place where I have the chance to get access to a corner of the world that has been off-limits for a large part of its history. It hosts some of the world’s oldest cultural monuments, including 19 Unesco World Heritage Sites. The history is so rich – it is in the heart of the ancient Silk Road between China and the Mediterranean Sea, and tourism is in such an early stage. It gives you back that extraordinary sense of wonder, the magic of traveling in a place where you don’t quite know the ending as you set off.

It also gives you a precious sense of humanity. It’s true that I have no desire to put my money or my voice into the pockets of people complicit with a regime of oppressive politics. But I do have the desire to connect and benefit the local folk. Iran is perhaps the friendliest country I’ve ever visited, and it’s the Iranians that leave the most lasting impressions from any journey here. Their warmth, their generous hospitality, their willingness to set aside enmities between countries, and welcome you with open arms. Iran is a reminder that it’s the human connections, after all, that make travel interesting. It is the first time in a foreign land I join dinners at stranger’s family homes – which allows me to witness family life behind closed doors. 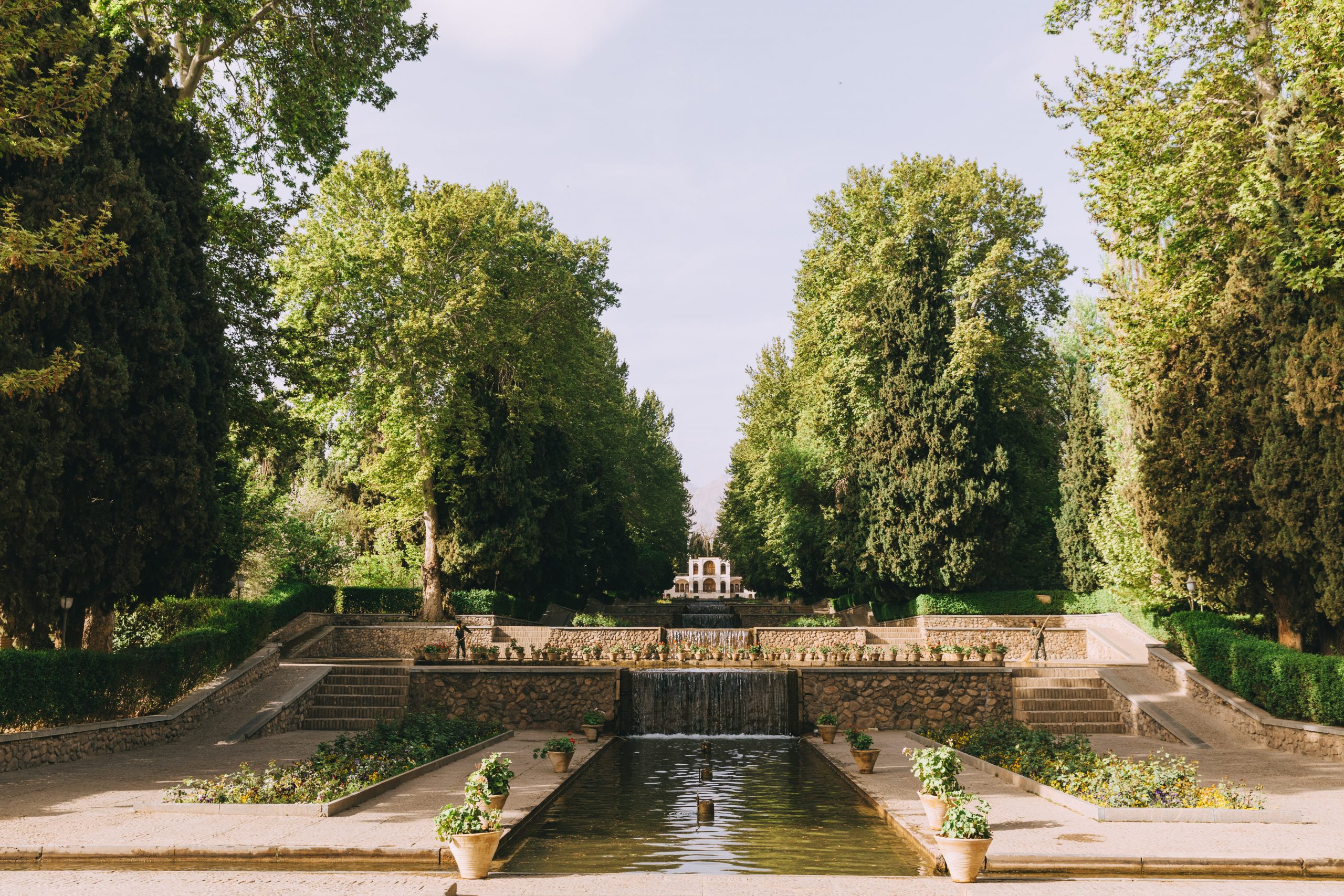 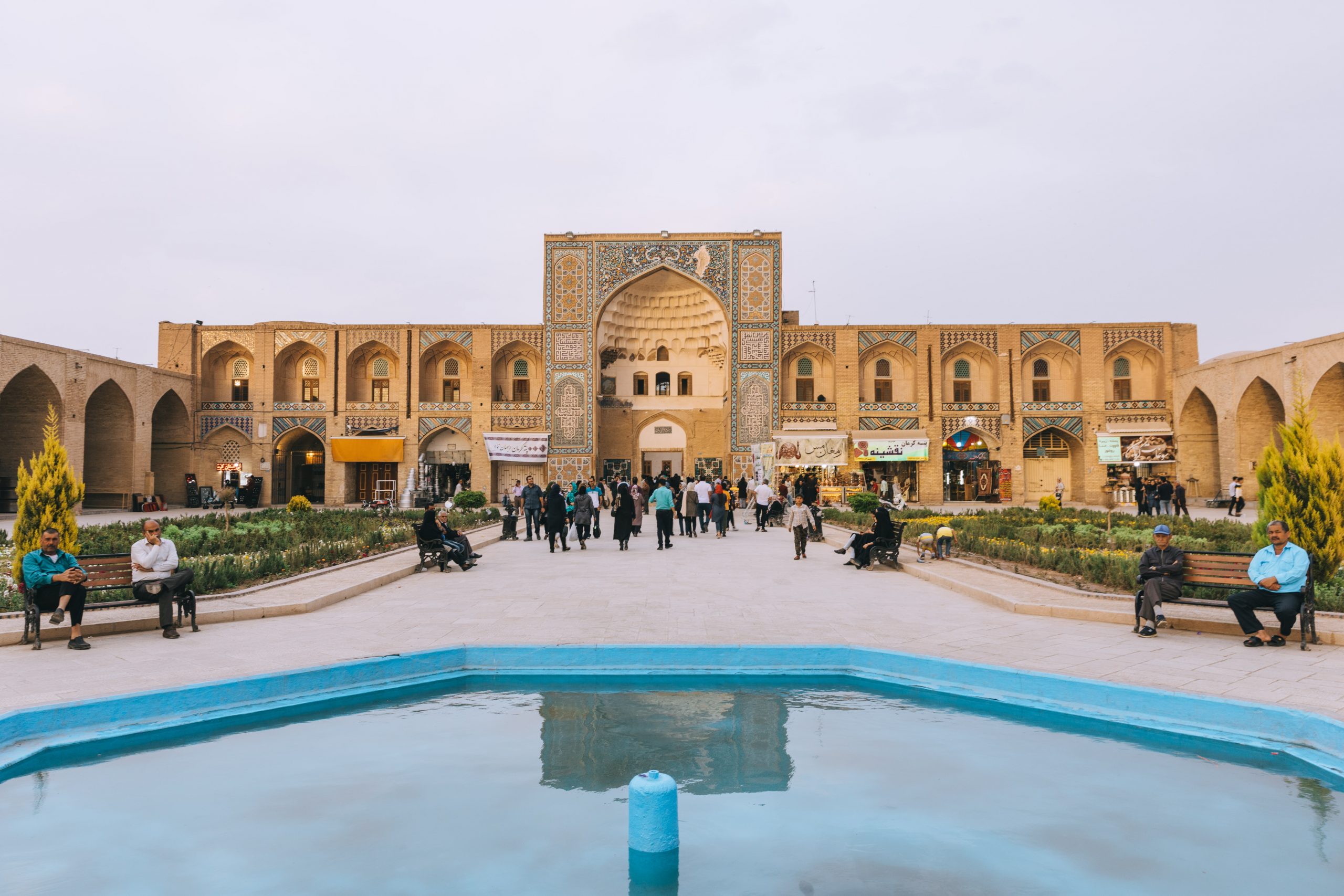 If I had to pick a city that makes my imagination flourish over Iran’s ancient golden times, it would be Yazd. I have just arrived in this charming Unesco town, after leaving the Lut desert and Kerman behind. It’s hard to put in words Yazd’s peculiar atmosphere, but it’s easy to taste it as I navigate among its winding lanes, blue-tiled domes, soaring minarets, covered bazaars, and elegant old courtyard homes. A feeling that completely changes as I set foot in Esfahan and come across its majestic monuments. Two hundred miles south of Tehran, Eshafan is a largely 17th-century city, with 1.3 million people, and its stunning mosques – decorated with exquisite blue mosaics – are among the most beautiful on Earth. No wonder Robert Byron, a British writer, once rated Esfahan “among those rarer places, like Athens or Rome, which are the common refreshment of humanity.” In the late afternoon and the early morning, I go for a walk along the Naqsh-e Jahan (Imam) Square – home to arguably the most impressive collection of buildings in the Islamic world. Far from being a static architectural attraction, as I stroll along its picturesque bridges, then through the historic Bazaar, I see locals spreading out on blankets for picnic dinners, groups of friends and families, even some couples holding hands. The square and its surroundings overlooking the river are anything but throng with real life. 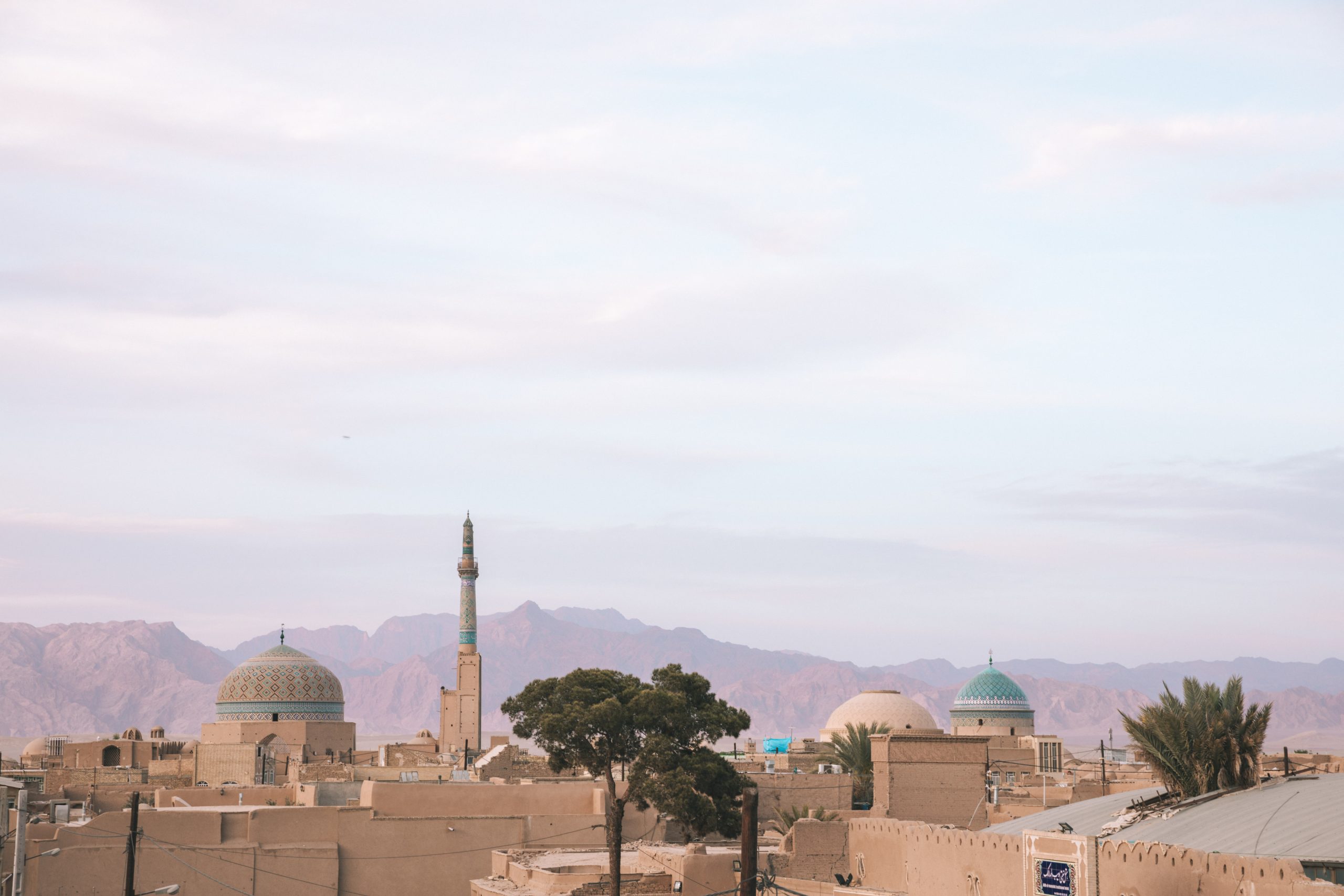 The UNESCO town of Yazd 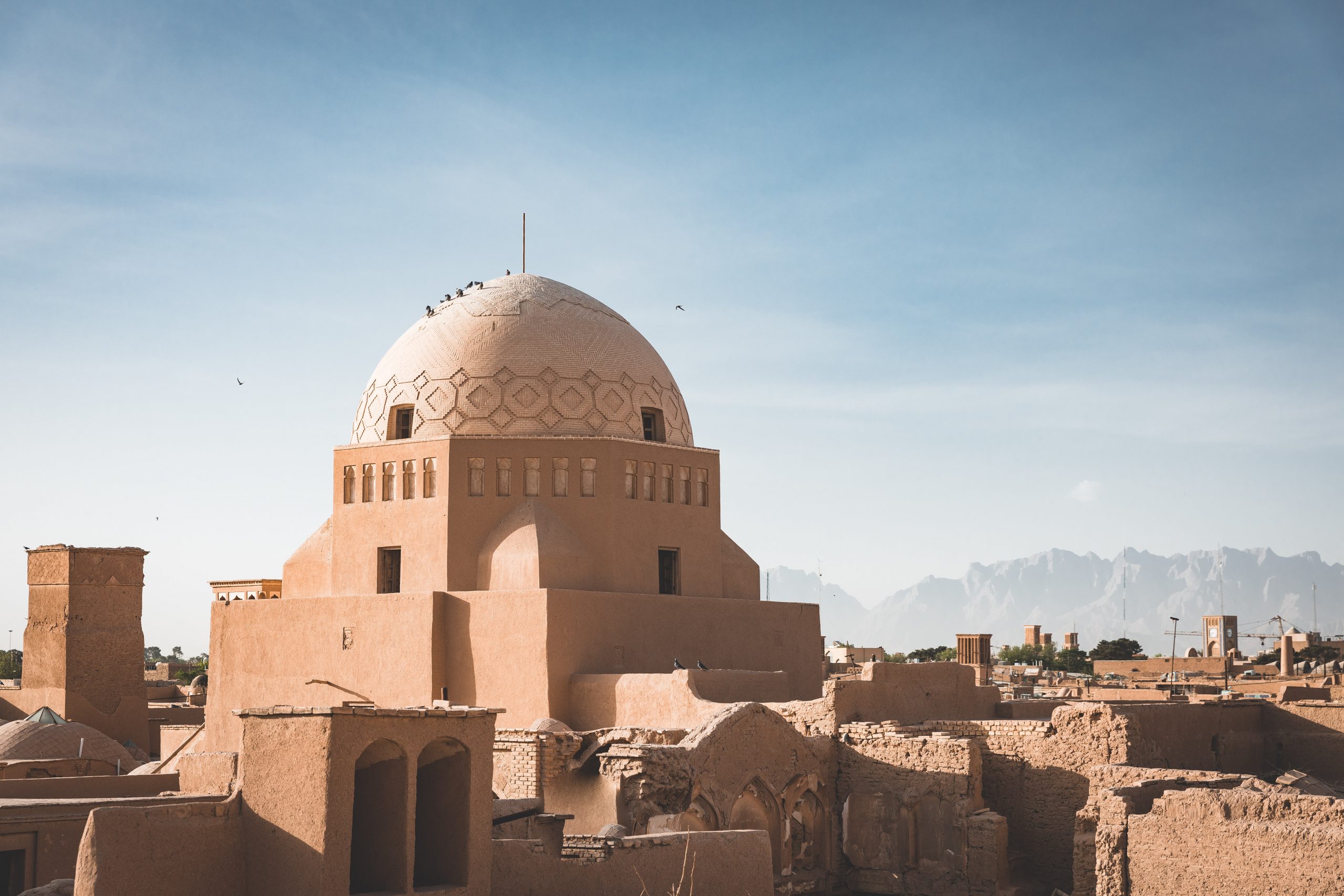 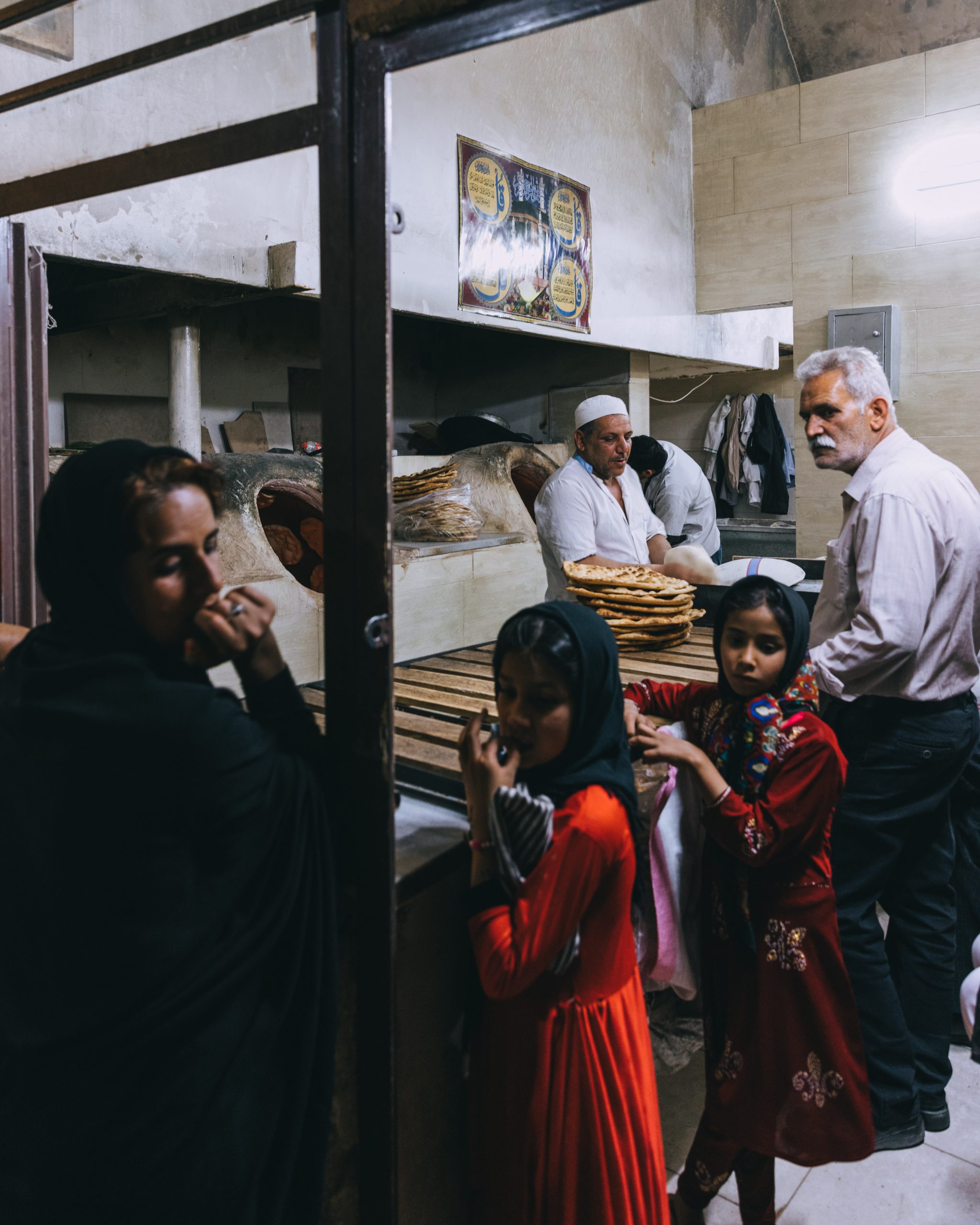 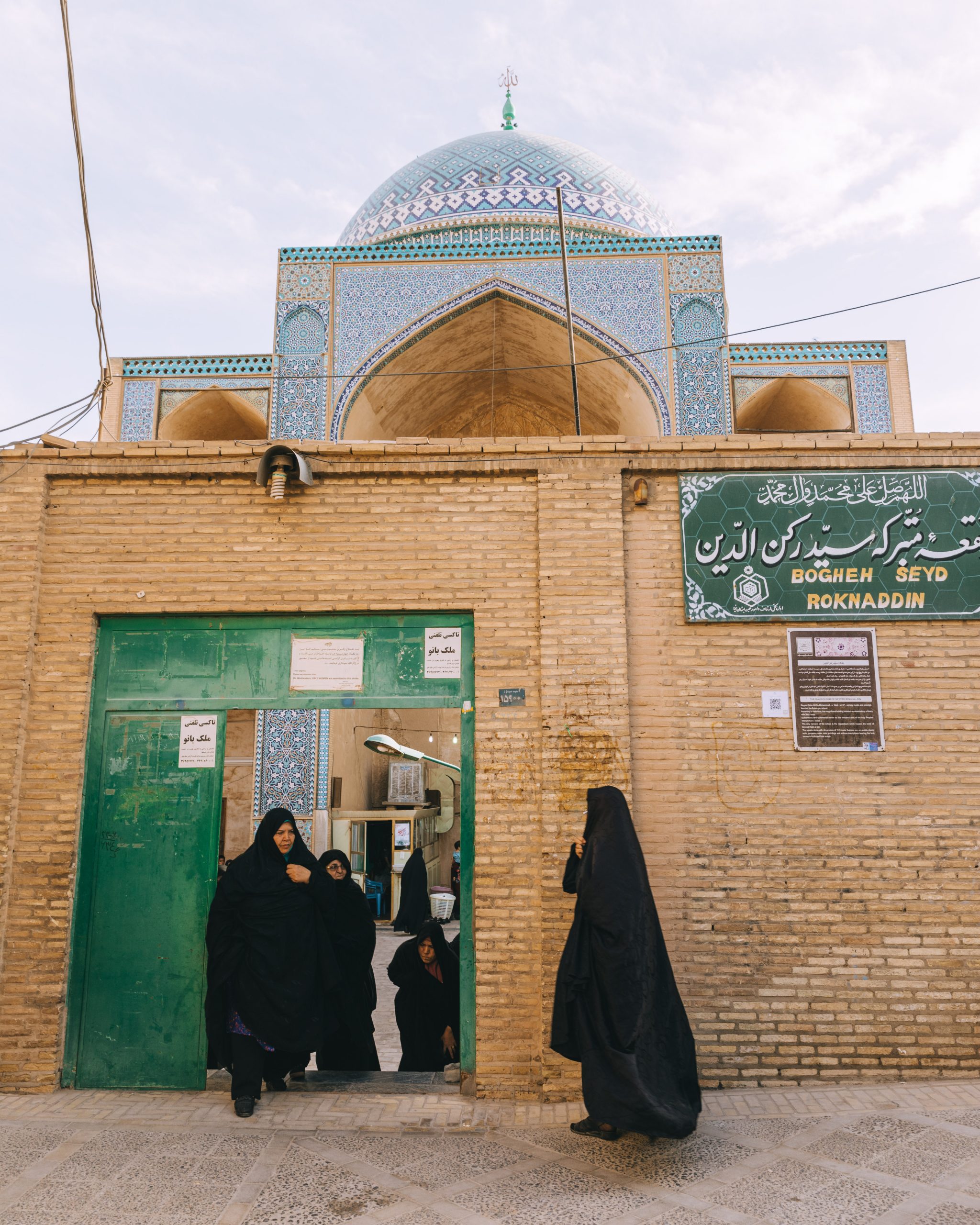 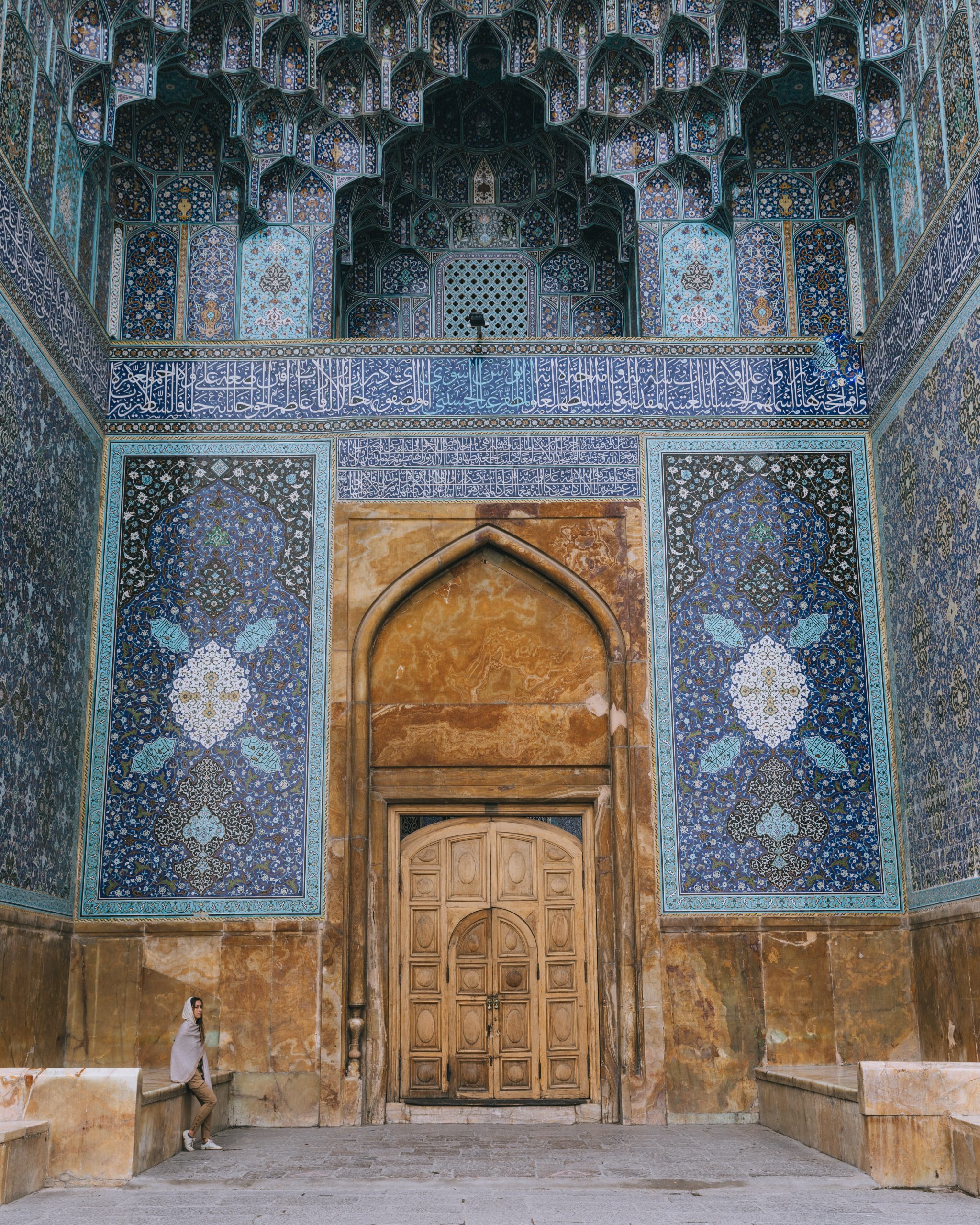 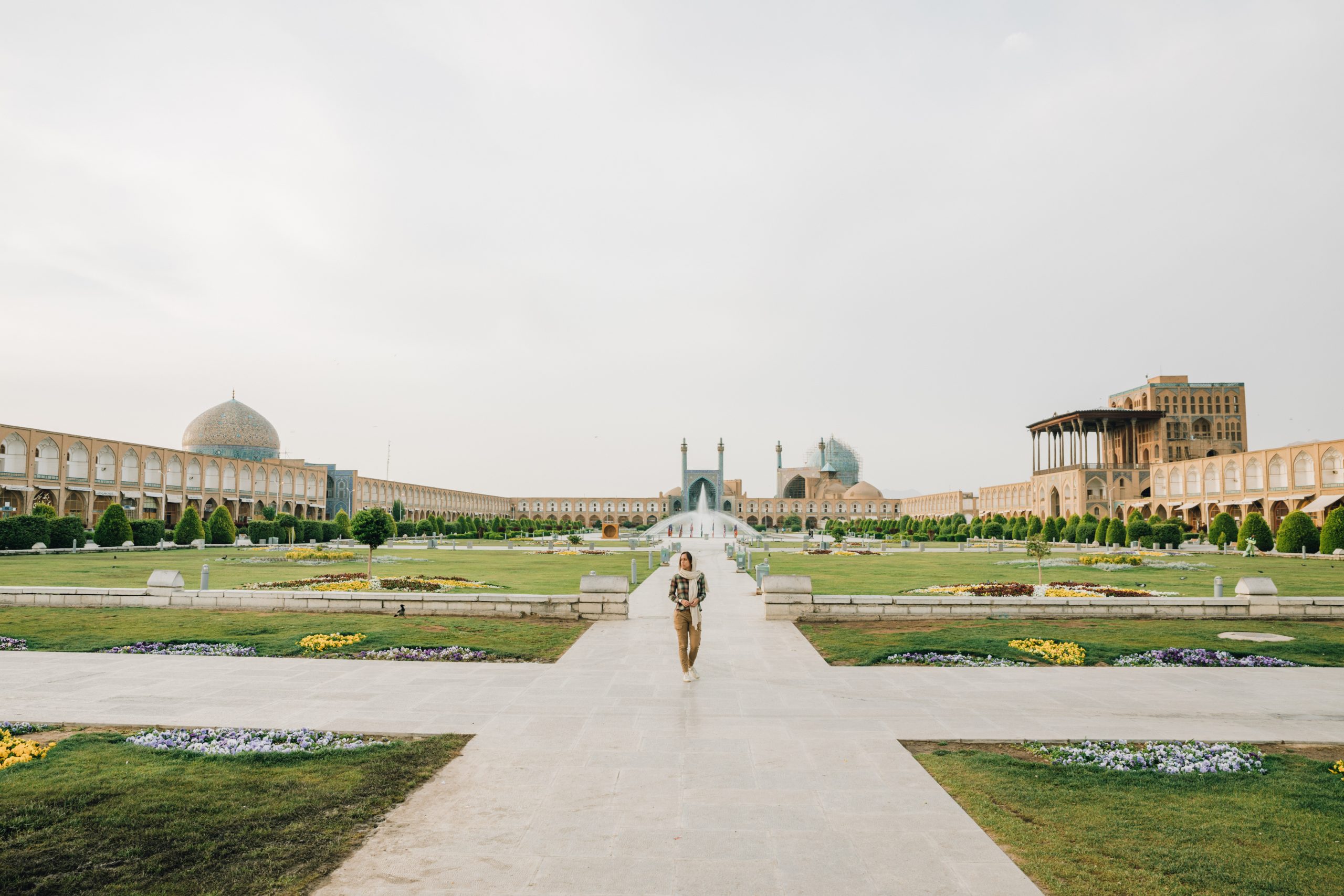 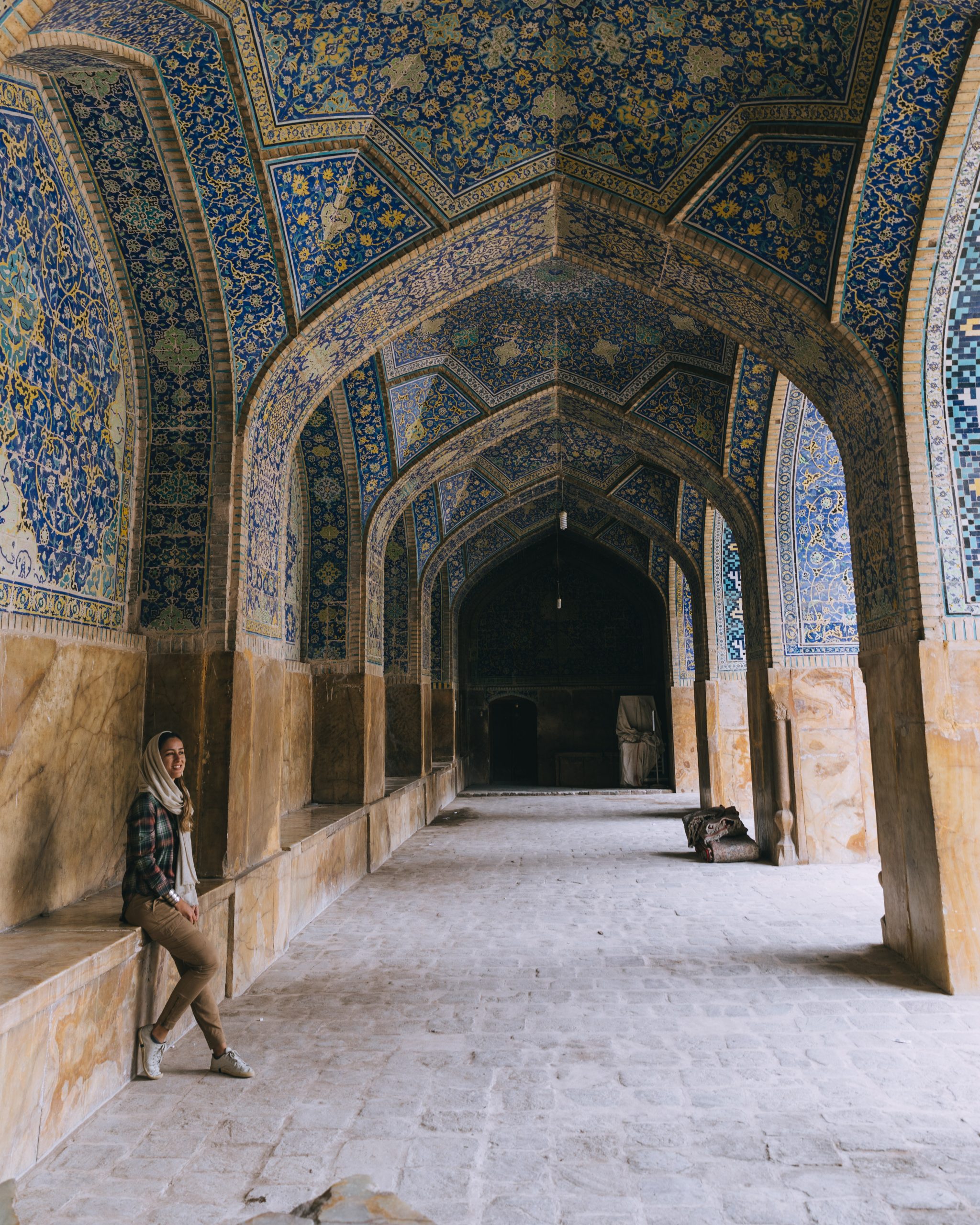 Then, on an early Saturday morning, I take another domestic flight to travel deeper into the country as I was eager to see for myself the magnificent, labyrinthine, Unesco-listed Tabriz bazaar. In most of the Iranian towns, Bazaars helped define the layout of the city, as well as its social and cultural life. But in Tabriz, it has a more prominent role as the world’s largest covered bazaar and once among the most important trading centers on the Silk Road. Covering around seven sq km, it is massive in size. It offers plenty of opportunities for shopping, but cruising across its 24 caravanserais (set of rooms arranged around a courtyard) and 22 impressive timches (domed halls) to observe the “every day” of young and old Iranians is Tabriz’s greatest draw. 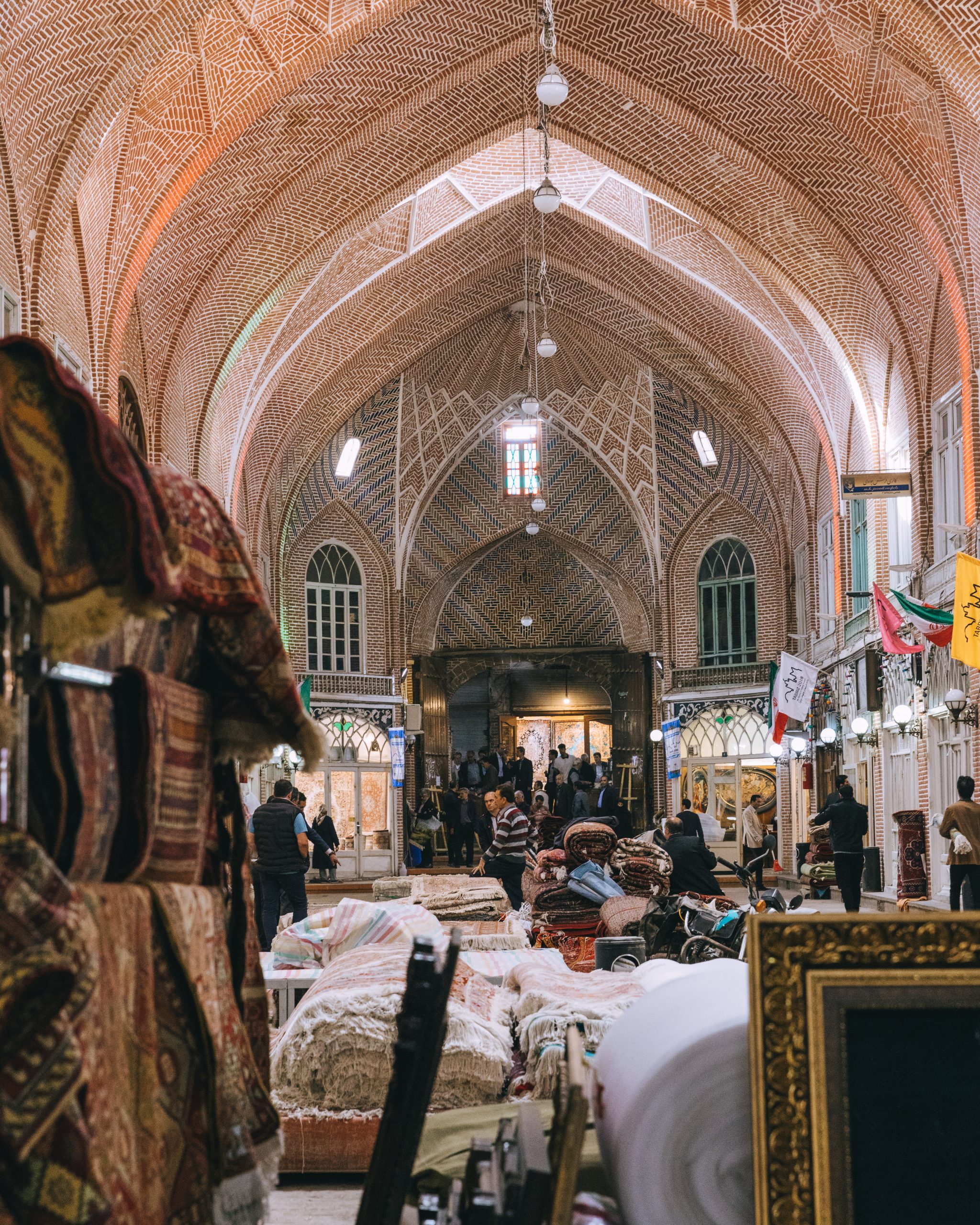 Tabriz, the largest covered Bazaar in the world 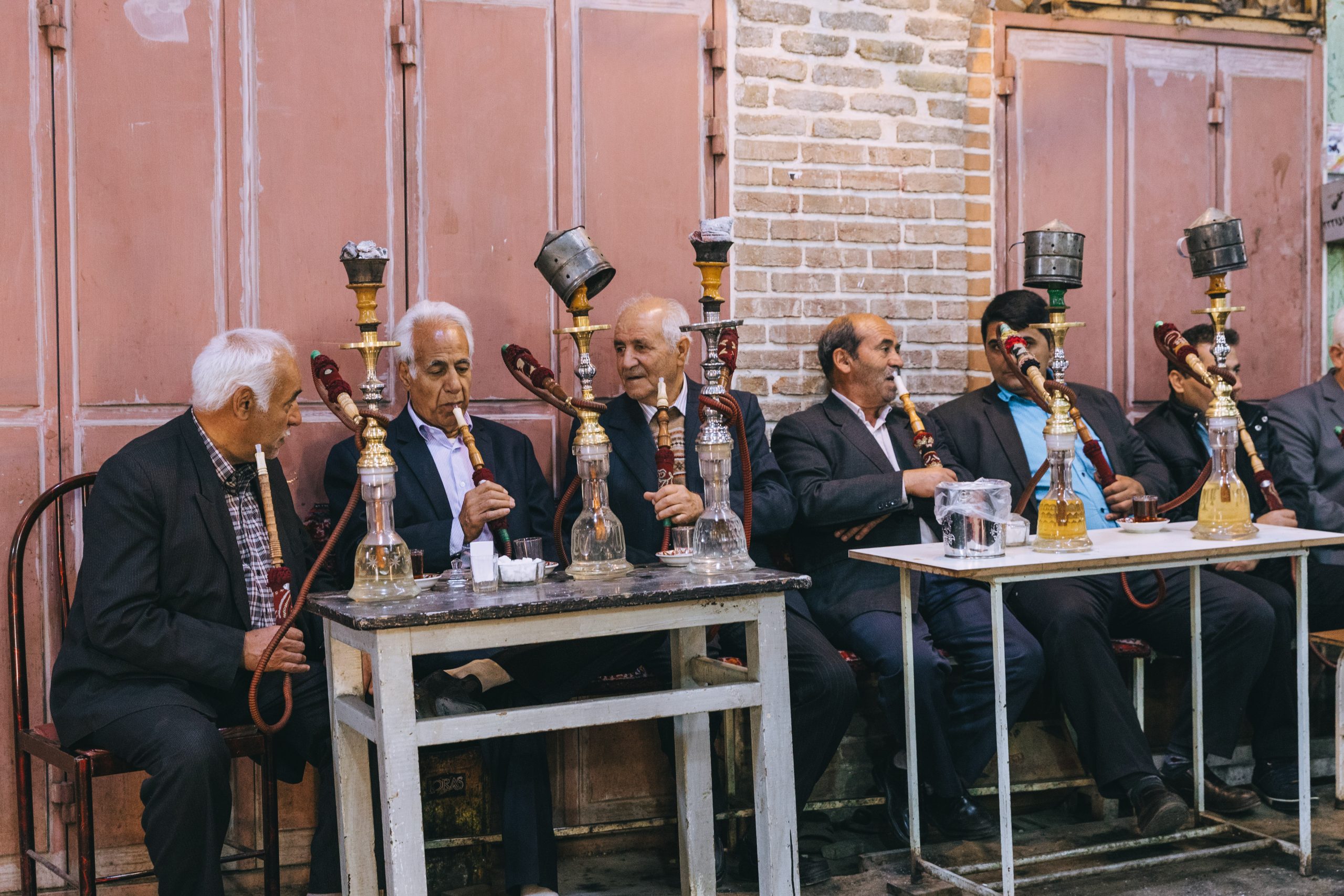 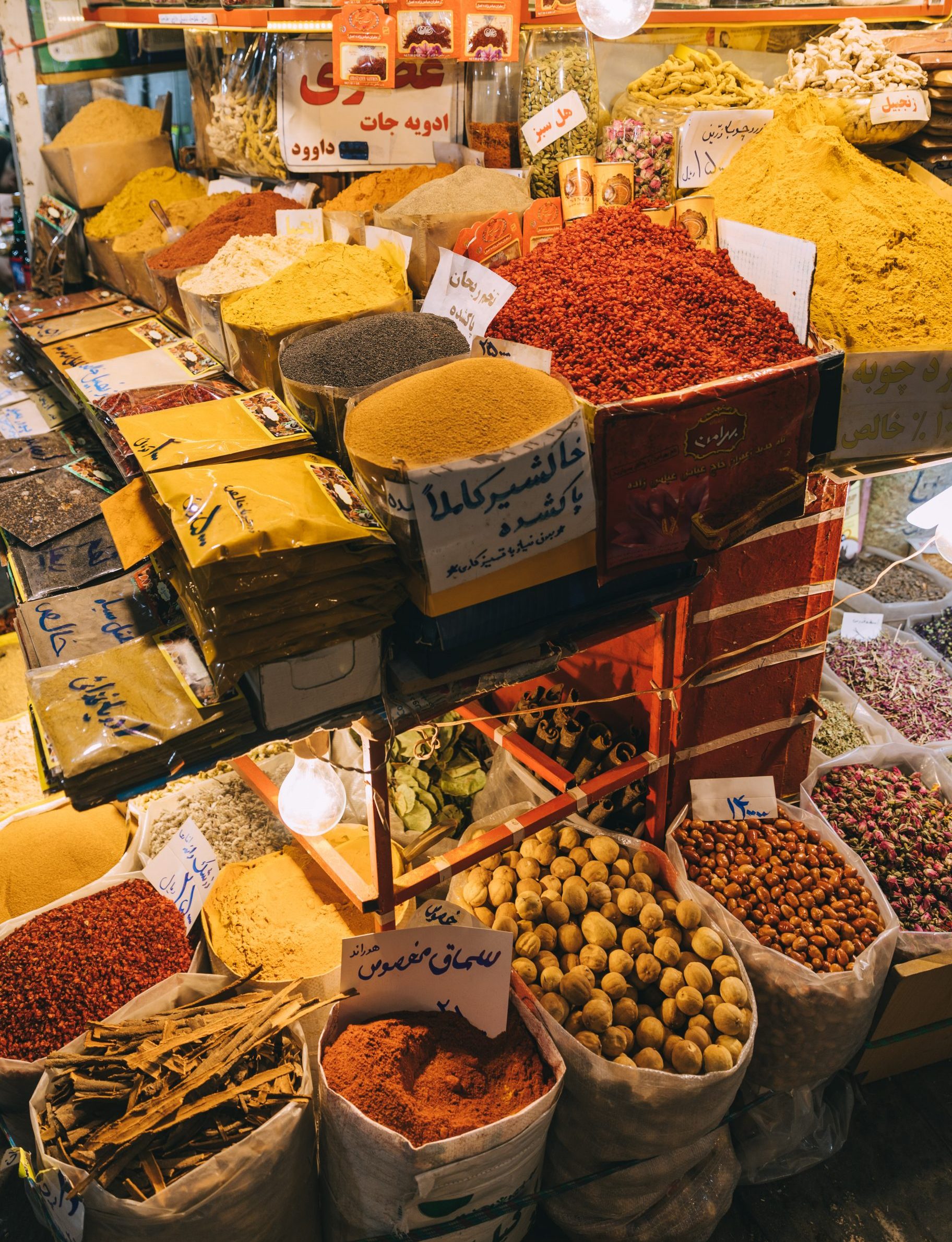 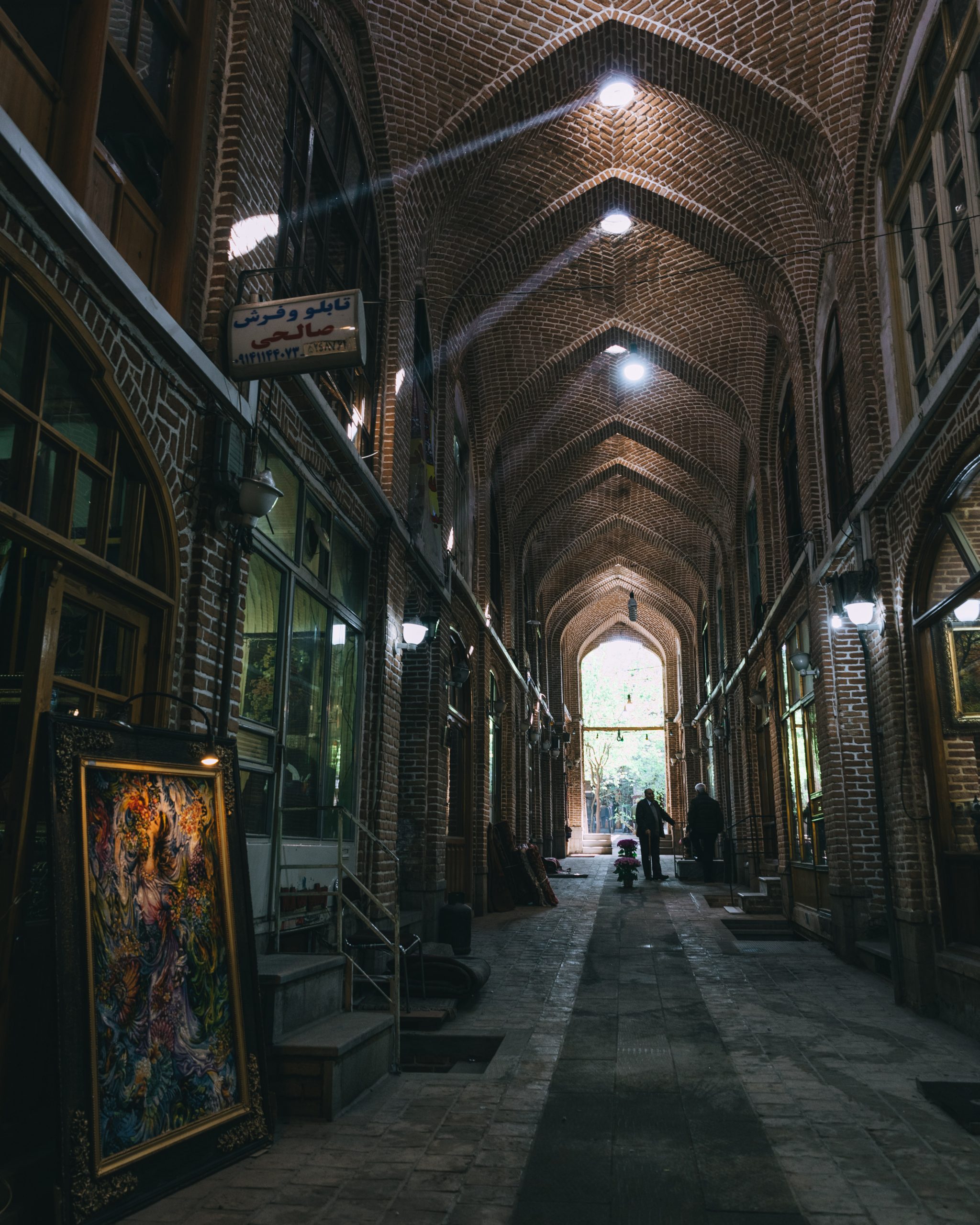 On the last day, before I catch a flight to Tehran on the way home, I do a day-trip to the Aladaglar Mountains, or Rainbow Mountains, in the Northern part of the country 25km from Tabriz. From up in the mountains, with no other soul on the horizon, I watch a madly surreal landscape: a mountain range so colorful it looks like an unearthly masterpiece of art. Contemplating this wilderness, close to a meditative state, I think of Hooman’s words in the desert about freedom. At that moment, I realize, only by traveling in forbidden territory, I’m able to comprehend that in spite of everything dark about its politics, there is also much to love about Iran. And while I do hope for change, I’m aware I’ve lost myself entirely – to the desert, to the mountains, to the culture, to the fascinating people that must be the jewel in Islam’s crown. 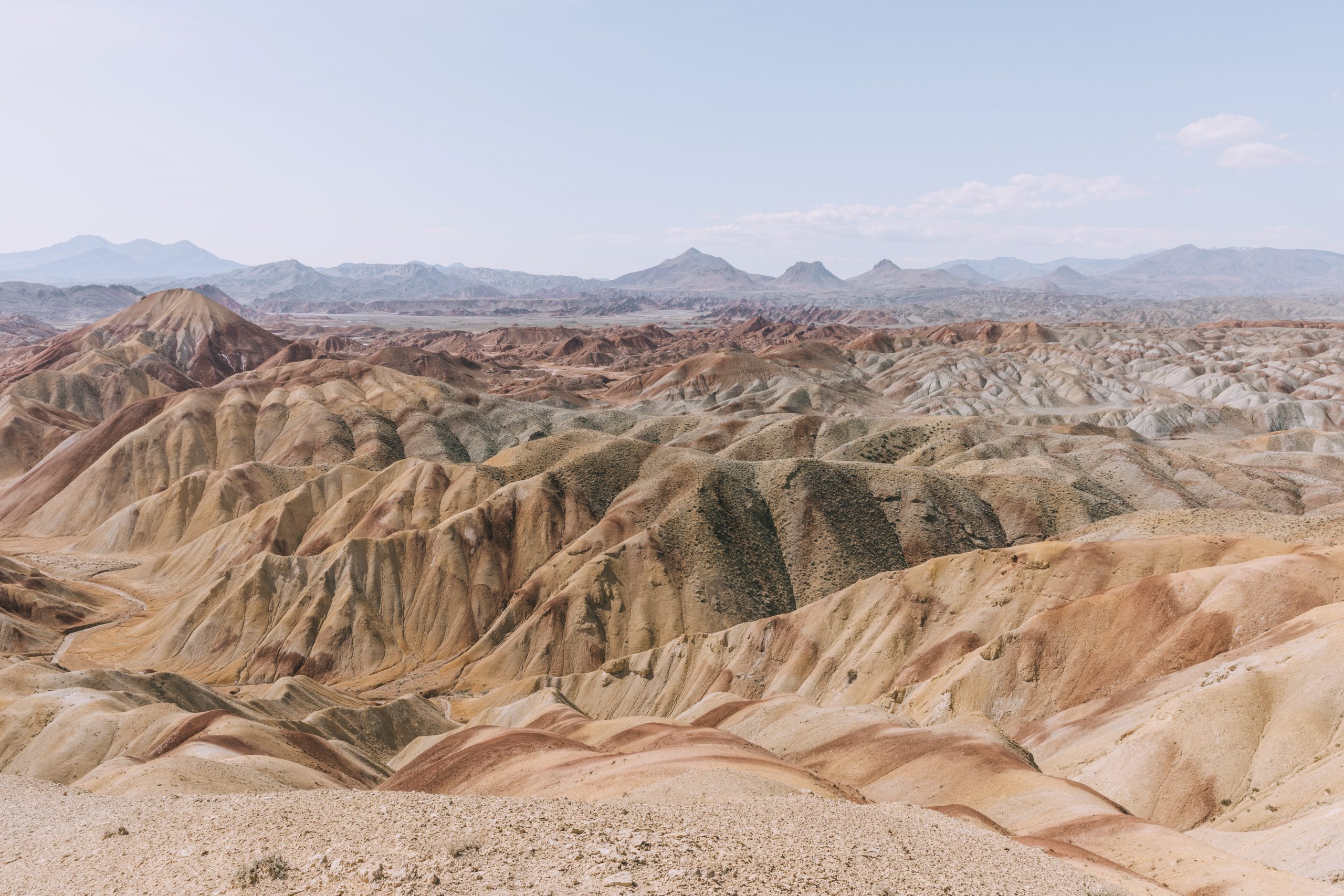 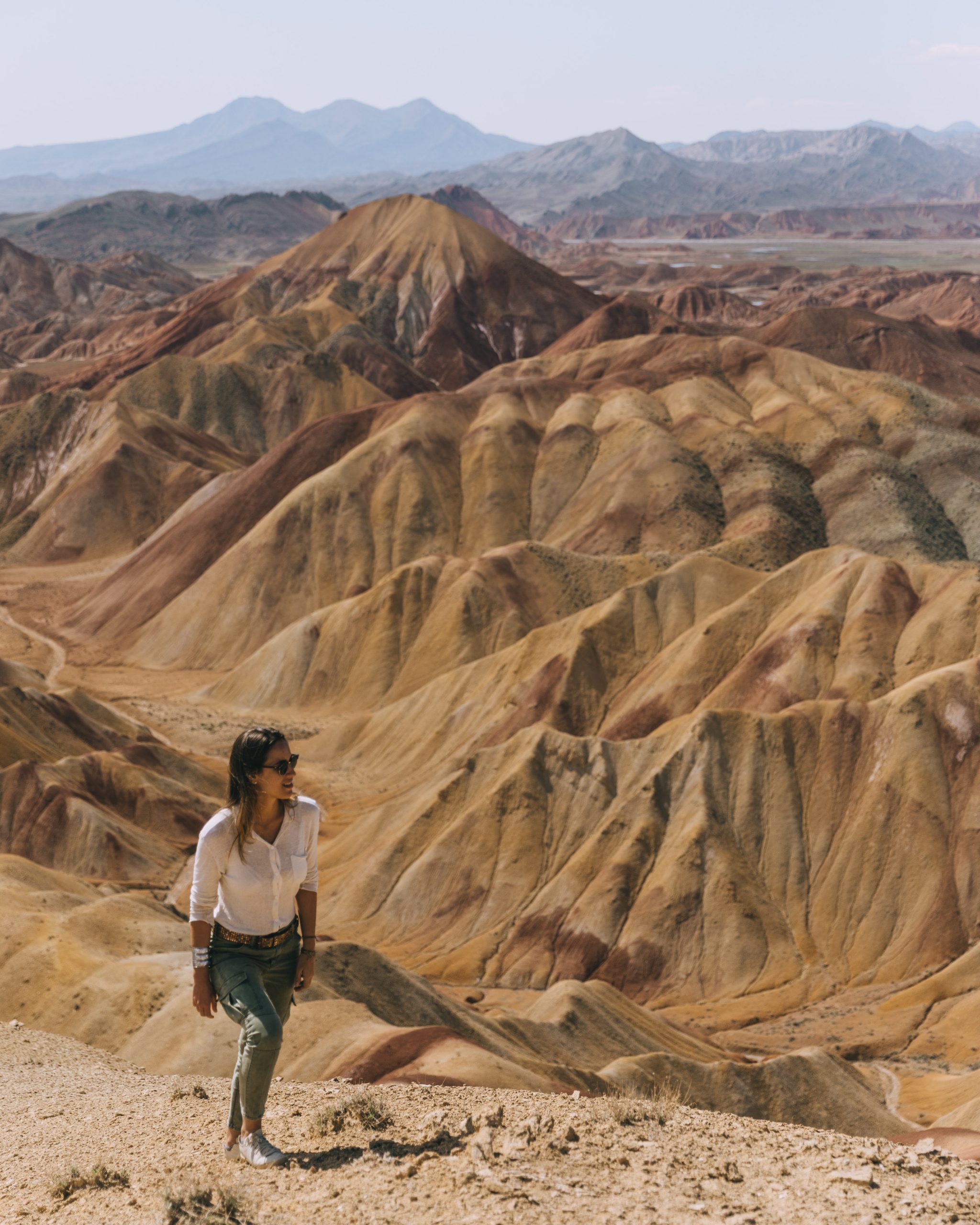 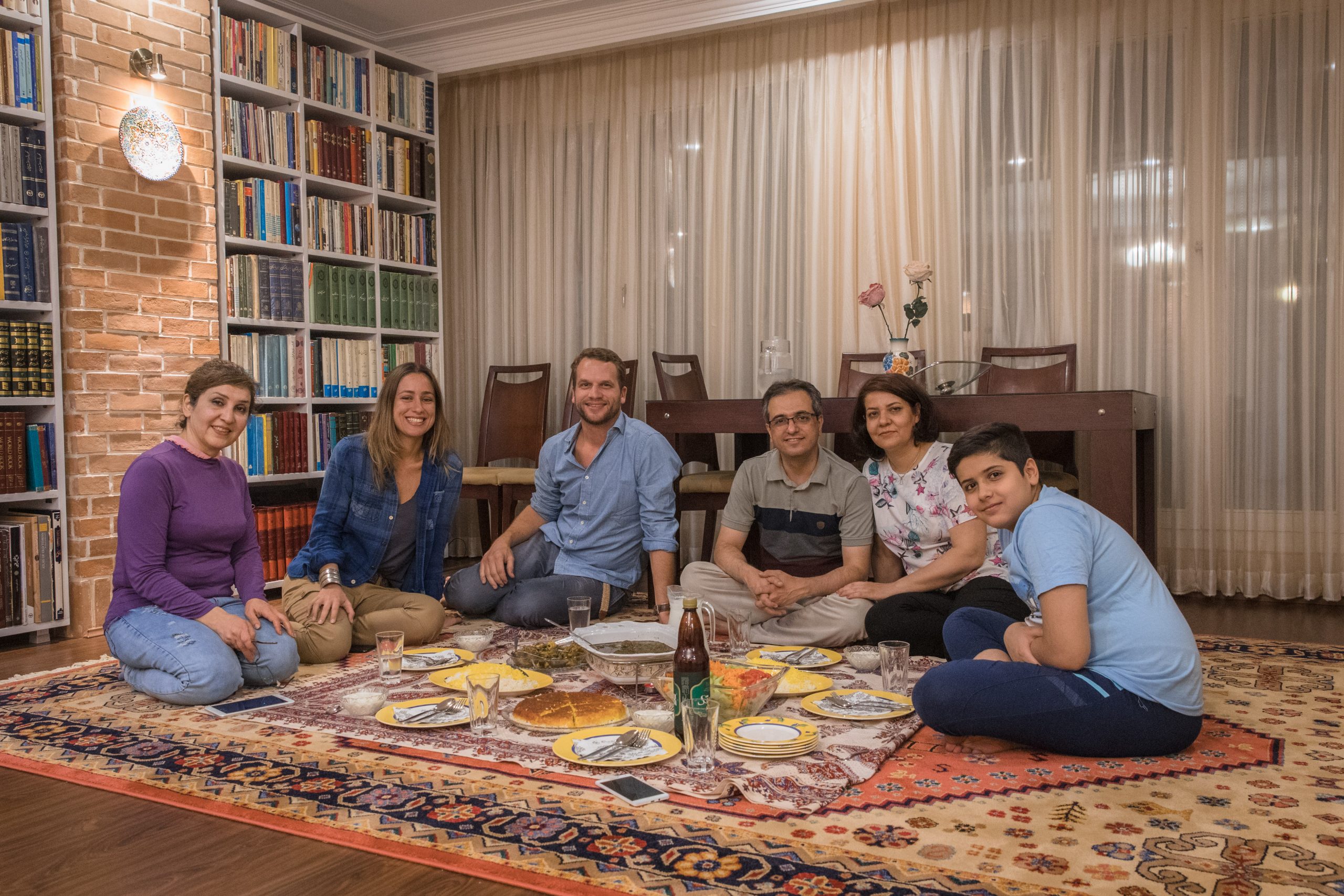 We traveled across Iran in March/ April 2018. For details on this trip, please contact Nanda at nanda@weloveitwild.com 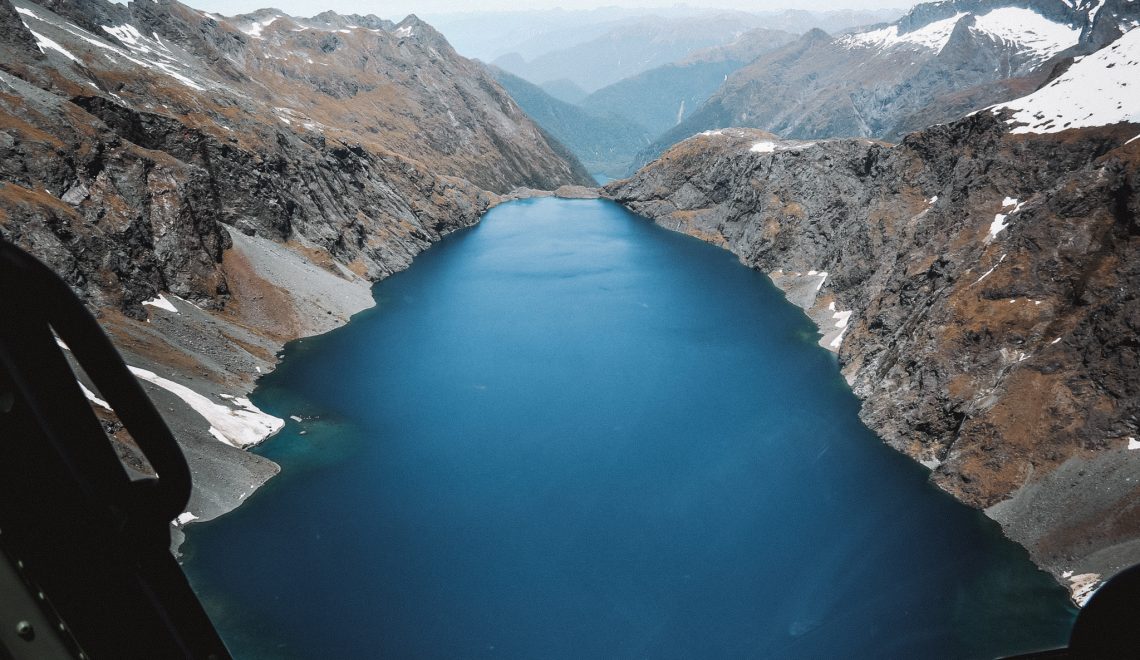