In the Berber’s footsteps

On the edge of North Africa’s desert, I watch nomads shelter from the sun in a camel-hair tent. A man herds his camels with curved daggers hanging down his back, and a long colorful scarf wraps around his head and neck. Mules swing their heads and stare. In the distance, the great stone and snowy caps fold of the Atlas Mountains behind the man, the animals, the tent.

It’s late February, and I’m in South Morroco, following in the footsteps of ancient Berber tribes – an indigenous ethnic group descendant of the pre-Arab inhabitants of North Africa. The Berbers, or Amazighs- (freemen in local language), are a people who, after repelling ancient Roman colonialists and surviving several Islamic dynasties, have kept their nomadic lifestyle alive across the deserts and mountains of Morocco (and Tunisia, Algeria, and Egypt). Their history serves as a link to the ancient past of the land and remains distinct from the Islamic faith brought about by the successive waves of conquest starting in the seventh century.

In the outskirts of Marrakesh, with views to the Atlas Mountains

The culture of Morocco is as diverse as its landscape. Apart from Berbers, it has been influenced by Arabs, Phoenicians, Sub-Saharan Africans, and Romans, among other groups. In 2020, most Berbers, it turns out, are no longer nomadic – except for some tribes of the Sahara. And that’s precisely why I am on a four-day road trip through some of the emptiest, most evocative corners of southern Morocco, revisiting the ancient caravan route through the Sahara – a track that has been pursued since the fifth century B.C. 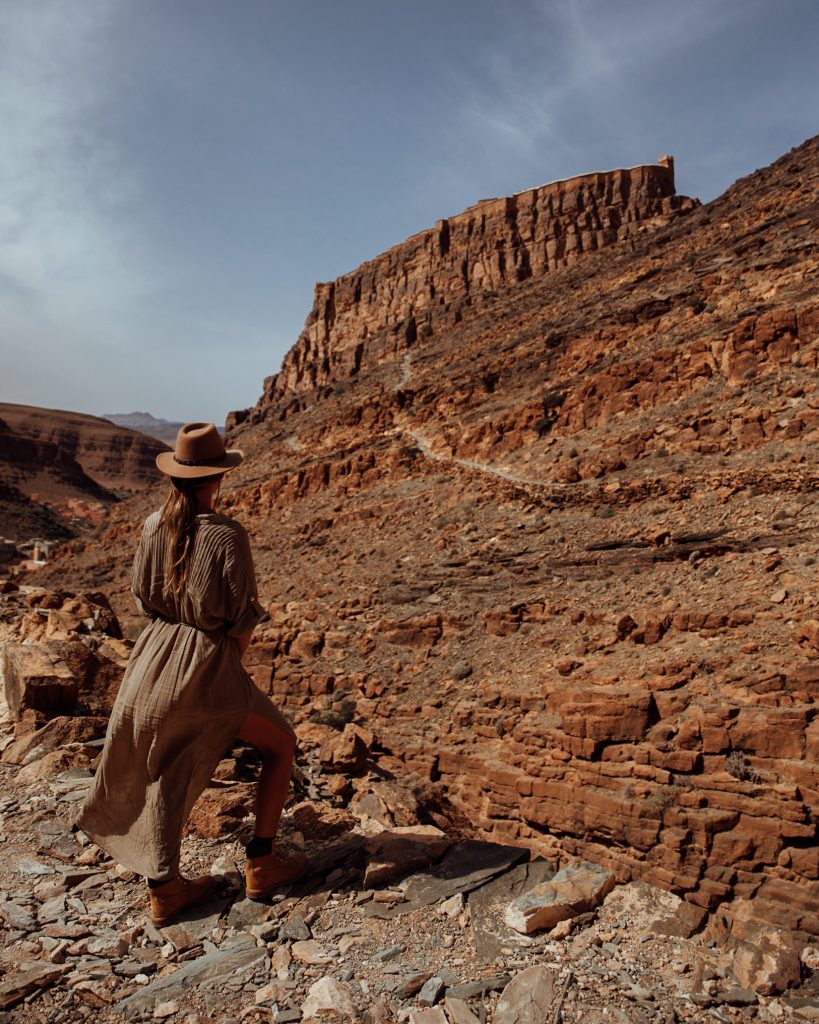 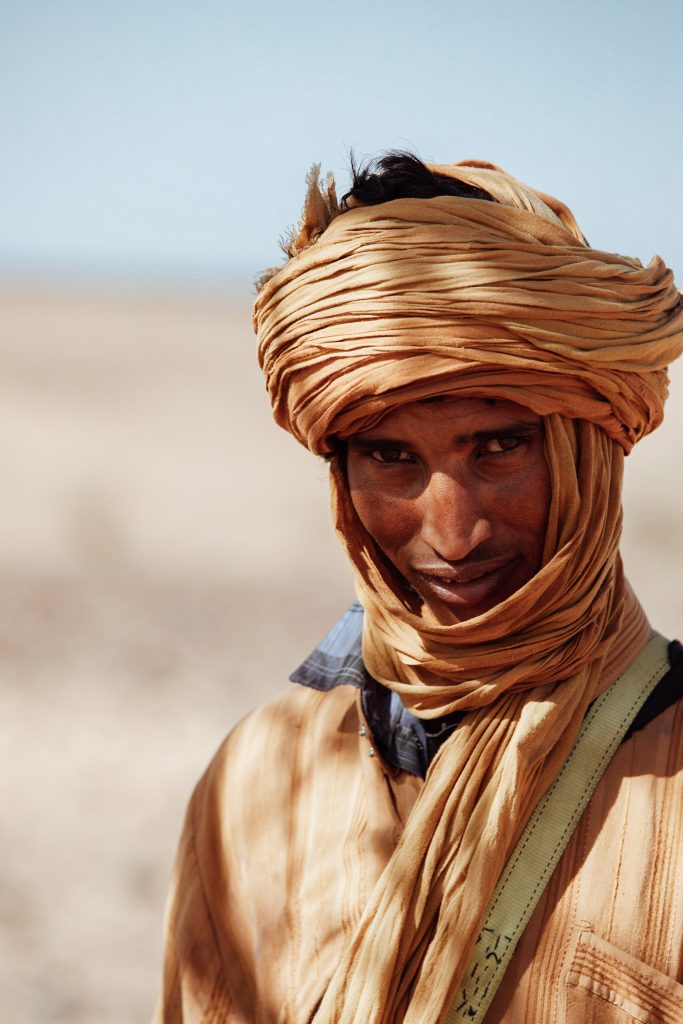 The people of South Morroco

Thanks to a Frenchman – Thierry Teyssier – well known for his theatrical events planning, I take in Morroco’s wilderness from private vantage points and a few spectacular roads unknown to anyone but locals. Recognized for having some of the most creative ideas in the world of deep-dive travel and confident that travelers require more comforts than nomads, Teyssier designed the Route du Sud. This unparalleled expedition takes me on a serendipitous discovery of Morocco’s southern extremes.

“Many people think South Morroco is just desert,” says Fabian, our RDS host. “Teyssier created the Route du Sud to change this mindset and show the different faces of a spectacular side of Morroco,” he goes on. The journey takes me to four isolated destinations in the country’s deep southern reaches. More or less equidistant from one another but diverse in landscape, three of these locations are where Teyssier has designed Maisons des rêves – dream houses, each finished by regional artisans and outstandingly beautiful.

The expedition commences as I’m picked up in Marrakech and, over three hours, driven northwest of Taroudant. I arrive in an out-of-the-way corner of Agadir – an ancient town in the foothills of the Anti-Atlas Mountains (Agadir is also the name used for the fortified granaries that nomads used centuries ago to store reserves of wheat, dates, and spices along trade routes). I stay high atop a hill at the edge of a canyon, above ridged mountains and groves of Argan trees – in a traditional whitewashed house. From the outside, the house looks like the half-dozen others in the tiny remote village; but the inside unfolds a gorgeous, elegant jewel with manicured style. My room’s view is sensational, but it’s the precious contrast between the new and old that I find most compelling.

Throughout the journey, diverse scenarios unfold in every direction. We spend a few hours on the road – every day – as we move south, taking dozens of unpaved turnoffs in pursuit of places that tell a story through beauty-saturated moments and total privacy. In between, we walk across villages, climb deserted hilltop fortress and Agardirs, and have a few pauses that leverage the surroundings to their full dramatic effect. Overlooking a vermillion-stained canyon in the remote town of Aojou, we reach elegant Maison Rouge on the third day of the expedition. Once again, I find myself in a mad, surreal Morrocan landscape. This time, on a cliffside above a dry riverbed across a vast, empty valley. 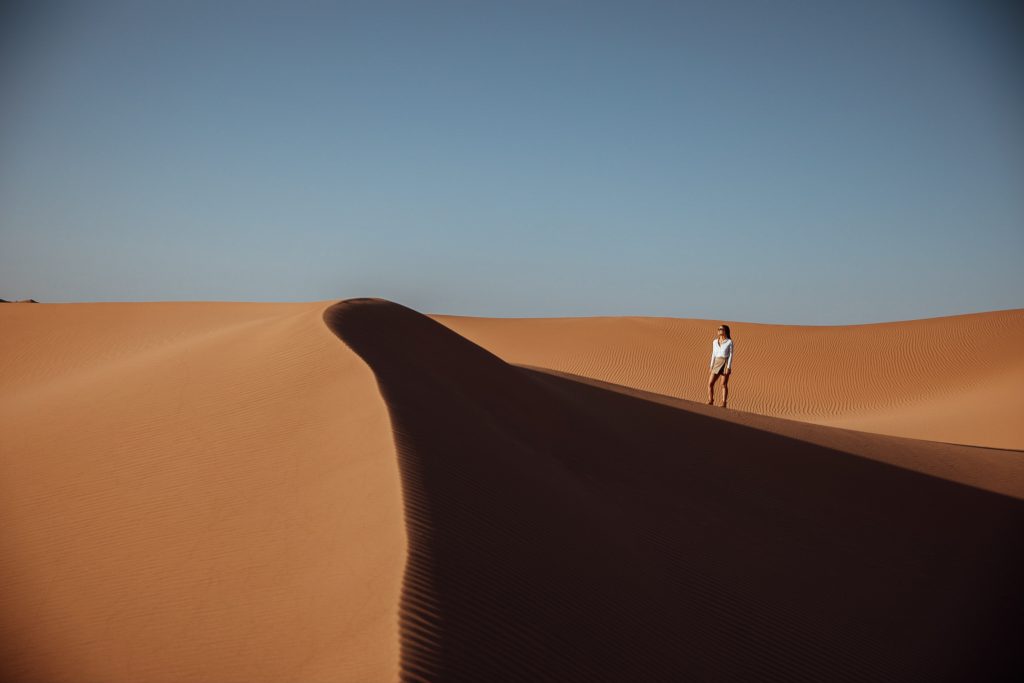 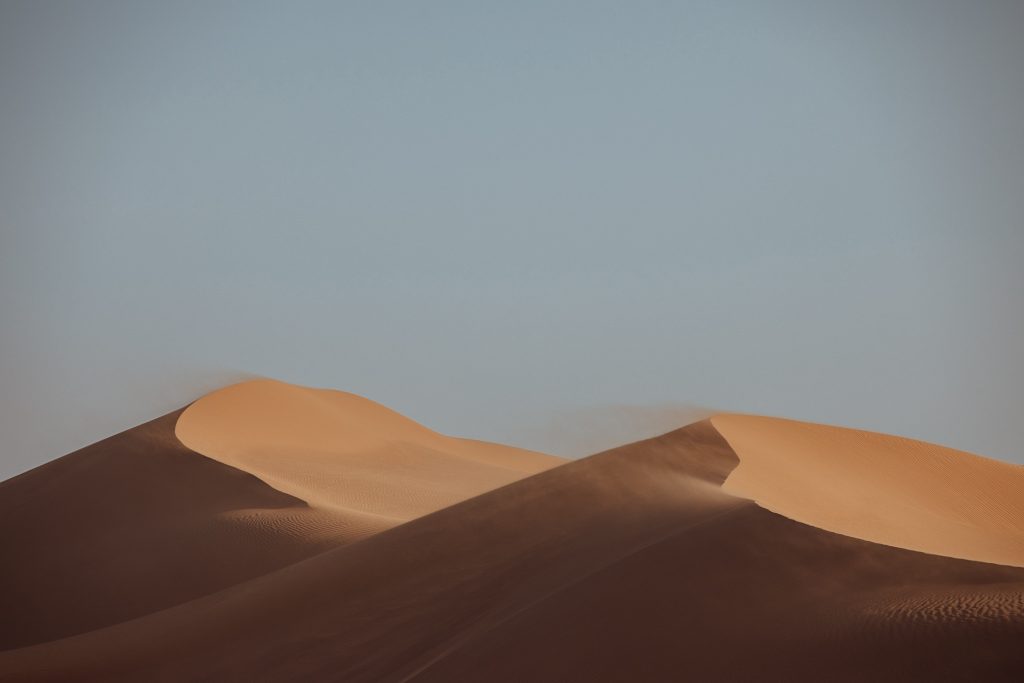 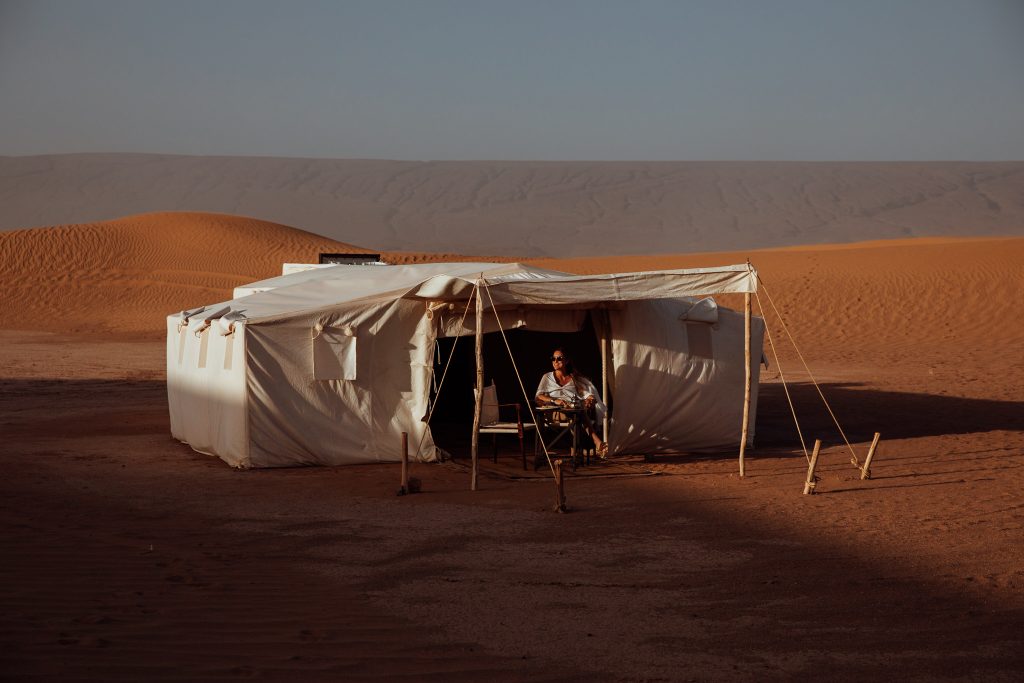 Camping in the Sahara

“Morroco’s ancient caravan route started in Timbuktu,” says Fabian. “It collected spices, salt, and other goods, in black Africa to deliver across Morroco over a two-month journey,” he goes on. “The caravans traveled on camels, passing by Algeria, crossing the Sahara desert, eventually stopping in Skoura, before continuing towards the Atlas Mountains,” he explains. As we follow the ancient Route and leave the shifting sands of the desert behind, the Sahara, now out of sight, is suddenly behind a line of red mountains. We head to Skoura, a town in Ouarzazate Province, in the Valley of a Thousand Kasbahs – which are fortified dwellings and former homes of the gentry or local chieftains. As I come across its riverbed, ancient villages, and more than 1,000 ruined castles, Skoura feels stuck in the Middle Ages. Locals make their living mainly from dates, camels, and nuts. Women have their heads covered by black burqas or headscarves. And men, with their brown faces, sit in the shade sipping mint tea. 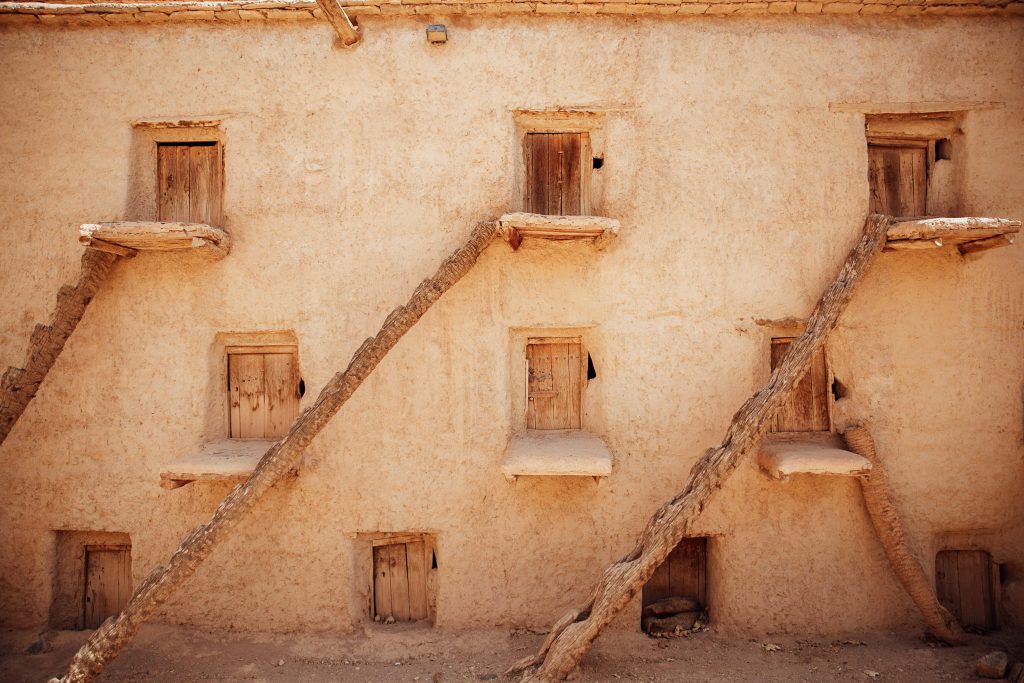 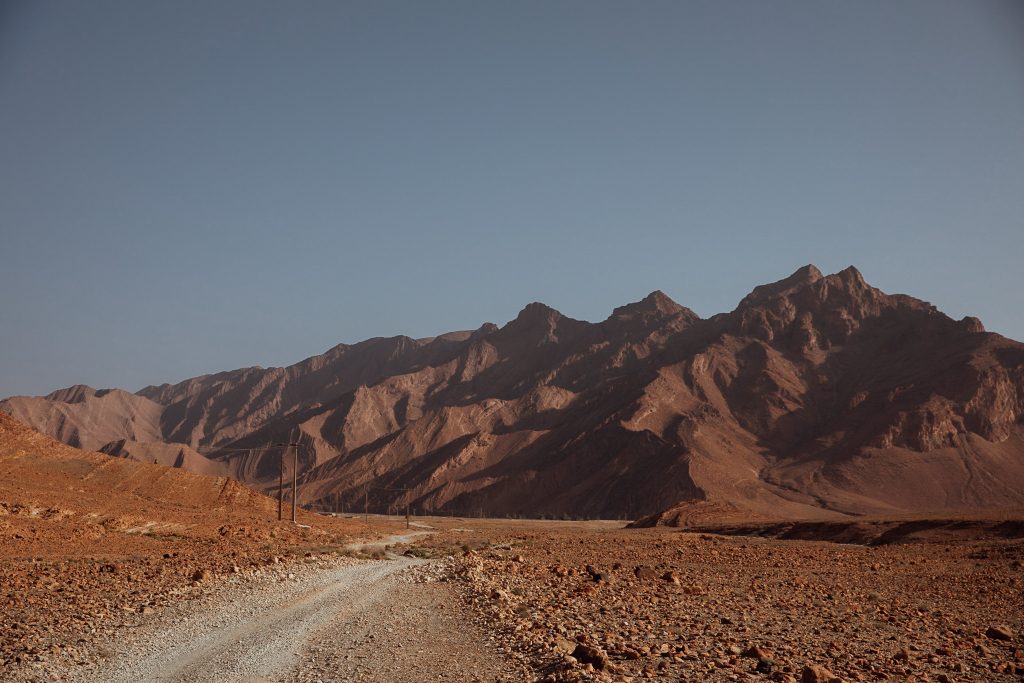 Set deep in the palmeraie of southeastern Skoura is Dar Ahlam – a restored two-hundred-year-old rammed earth Kasbah turned into an utterly authentic hotel – another masterpiece from Tessyier. I stop here for two memorable nights before crossing the rugged Atlas Mountains to head back to Marrakech. Although Dar Ahlam exposes me to one of the most remarkable hotel experiences, after four days, followed by the theme of exile and absence, I slowly get used to bumping into other travelers. But the Berber element remains strong as well as the intriguing feeling of standing in the epicenter of the ancient trans-Saharan caravan route. This is a place where Europe, Africa, and Arabia’s trade and culture collide. It’s electrifying to taste the interconnected world that retains traces of a life of wander and holy pilgrimage. 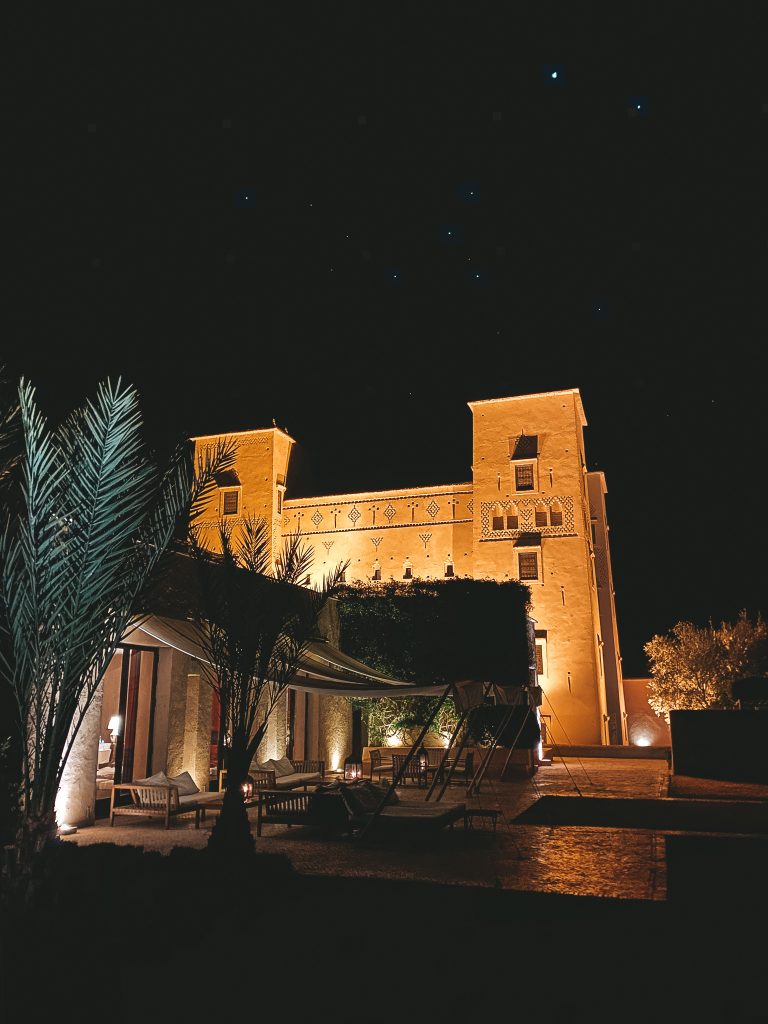 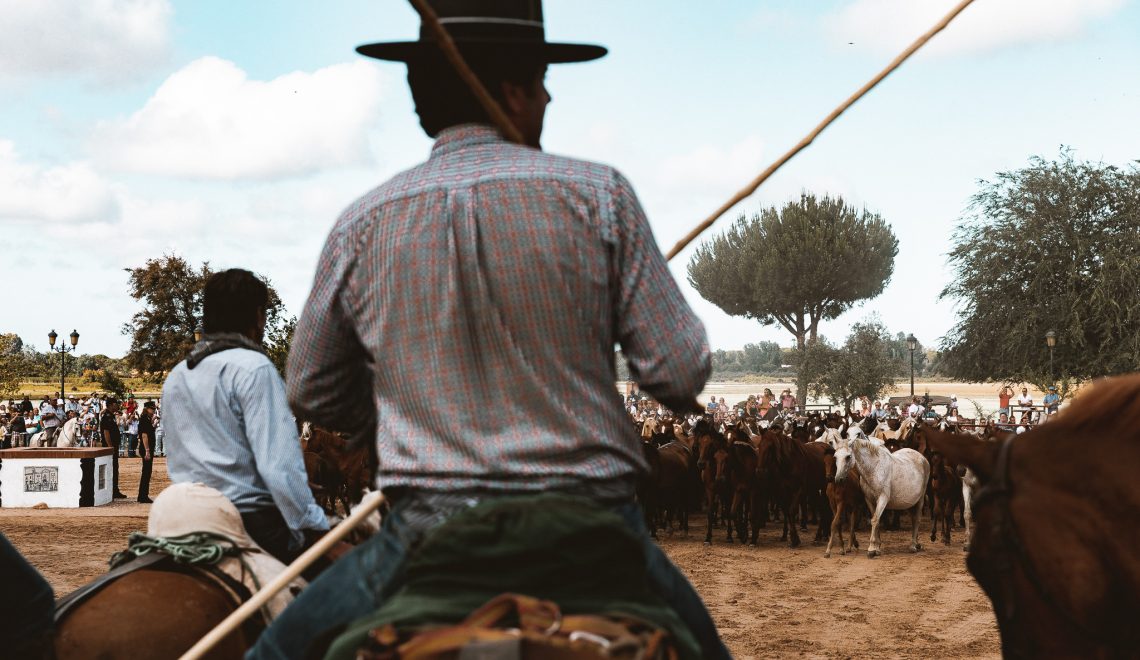